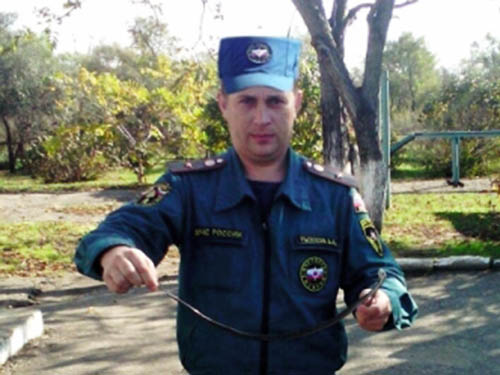 An extraordinary incident marked the morning of 29 September to October the district hospital in the Jewish Autonomous region – in one of the wards in the infectious disease Department found the snake. The staff was urgently evacuated patients of the ward and called rescuers who caught the reptile, reported on the website of the regional emergencies Ministry.

The message about the dangerous find was received in the office around 10 am local time. In place of the departed chief of the guard fire brigade of the village of Amurzet N2 Anatoly Medvedev and the head of the Department of Supervisory activities and preventive work in the October district of the Central Board of EMERCOM in EAO Alexander Ryzhkov.

We have captured this reptile with the help of canvas gloves, – said Ryzhkov. – Had to wait a while, and then grab emerging from the cracks in the floor of the snake near the head. The animal was taken outside of the district center and released in the forest. By all indications it was a Viper.

Rescuers warn that with the onset of the cold season one can enter the homes of people reptiles, rodents and other small animals, causing significantly increases the risk of human infection of infectious and parasitic diseases: leptospirosis, tularemia, hemorrhagic fever with renal syndrome, yersiniosis, toxoplasmosis, pseudo-tuberculosis, etc.

Earlier it was reported that in September has risen due to heavy rains the river water is expelled snakes, including poisonous, from nests, and reptiles went to seek refuge in the capital of the Jewish Autonomous region of Birobidzhan. According to doctors, since the beginning of the month there were several cases of attacks of reptiles on humans.

This year the attack snakes more than last year, – told reporters the chief doctor of the ambulance station of Birobidzhan Leonid Gulenok September 12. – Last week only for the day, there were four cases: three in Birobidzhan, one in the Birobidzhan area. The bites were harmless, mainly observed local reaction – swelling, itching. Mostly people have suffered from the attacks of Copperhead, the doctor said.

Heavy rainfall caused rise of water level in rivers and flooding of the floodplain, – explained the head of Department on protection and use of objects of fauna of the government of the Jewish Autonomous region Alexey Feoktistov. The water began to sink snake, the snake began to look more favorable dry places. According to him, once the water is gone, the threat of the spread of the snakes will come to naught.

In case of detection of snakes experts strongly recommend not to try to catch her alone, and to call rescuers, because few people can distinguish between dangerous and poisonous snake from a harmless snake and first aid in case of bite.