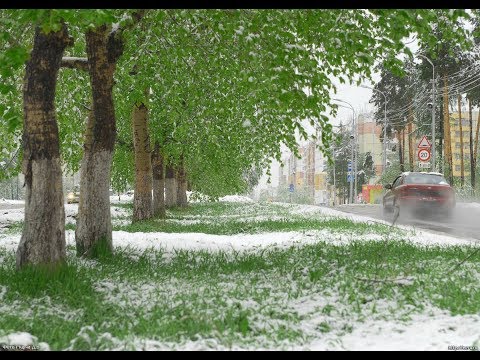 Unexpected news from weather forecasters: snow may fall in the European part of Russia in the next few days. For several days the European part of the country remains in the power of a powerful frontal divide – the same that previously caused a record flooding in Western Europe.

Fortunately, it has reached us in a weakened form. Even so, however, it can still make mischief. The most impressive figures were recorded by meteorological stations of the Black Earth region: in the Lipetsk region in 12 hours it poured 30 millimeters of rainfall, in the Voronezh and Orel regions – more than 20 millimeters. Rostov region was hit hardest of all: 39 millimeters of rain within half a day. There was also recorded the strongest wind: its gusts reached 26 meters per second.

Neighboring Ukraine was hit by bad weather again. Once again there were dust storms and stormy winds ripped the roofs off the buildings. However, this was not the peak of the atmospheric front’s power – today it will strengthen again, and the weather situation will be much more difficult.

The fact is that a fragment of a dying front reached the Black Sea the day before, and this led to its “regeneration”, so today the Russian plain will again be covered by rain clouds of the frontal partition. Southern Russia and Volga region will be in the epicenter of inclement weather – there could be about a third of the monthly amount of moisture in a day.

For example, bad weather will peak today in Kazan in the middle of the day, and at the end of the day the atmospheric front will bring about 25 millimeters of moisture to the city. This is more than it falls here in total during the whole third ten-day period of July!

Another consequence of the frontal incursion will be cooling, because it brings to European Russia air masses from the North Atlantic. Already today hot weather will remain only in the southeast of the region, and in the middle belt is even a little cooler than climate predicts: daytime temperatures are +20 … +25. An even more powerful cooling is expected in the northern latitudes: +10 … +15 in the midday hours of September. Snow may even fall tomorrow in some areas of the Kola Peninsula.

The cold will reach the Crimea. So, thunderstorm rains in Yalta will bring down the thermometers from yesterday’s +33 to +25. However, on Friday the temperature in Tauris will begin to rise, and at the beginning of next week the thermometers will reach +30.

A similar forecast for the capital. In Moscow today for the first time in recent weeks the temperature will return to the climatic norm – +23. Tomorrow in the city may see light thunderstorms in places, so it will not get warmer. But starting from Sunday the air will warm up again, the daytime temperature will again be above the long-term average: +25 … +27.