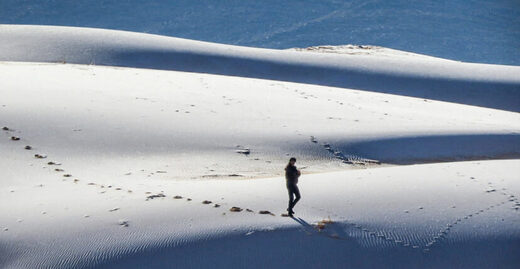 A blanket of snow could be seen in an area near the desert city of Ain Sefra in Algeria when temperatures dropped to -3 ° C. Surrounded by the Atlas Mountains, Ain Sefra sits about 1,000 meters above sea level.

The unexpected scenes were captured by photographer Karim Buscetata, whose striking photographs captured snowfall on the famous dry sand dunes.

The Sahara is known to have one of the harshest climates on Earth, with very little rainfall, strong winds and a wide range of temperatures.

While colder temperatures can indeed be recorded in various regions of the desert where it can be cold at night, low humidity levels mean snow is a rather unusual phenomenon.

The Sahara is not the only place where the weather has changed dramatically in recent weeks. In the Asir region of Saudi Arabia, mountains and deserts were covered with snow.

It is reported that it has been half a century since the temperature in the Azir region dropped below zero.