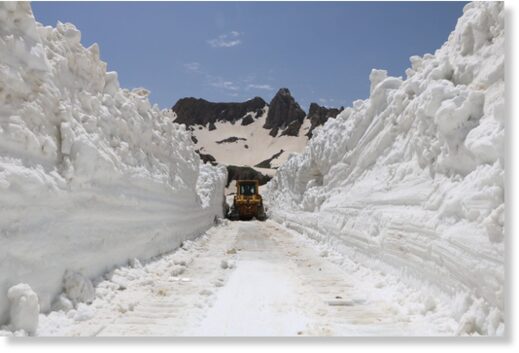 Hakkari, known for its violent weather, is littered with snow up to 7 meters in depth, despite the fact that summer has come. Snowfall was especially severe in rural areas of this southeastern Turkish province.

In the Yuksekovsky district, teams are working on clearing snowy roads. Snowplows pierce 3 meters of snow in areas with high altitudes. Over the past 20 days, crews have been working on opening roads leading to military bases in the Gellerbashi area, about 40 kilometers from the center of Yuksekov.

So far, the 16-kilometer road has been mostly cleared, while the snow depth in some sections reached 7 meters. Officials say they expect the road to be completely cleared in about two weeks.

Hakkari province is a real “bear corner”. And the point here is not only remoteness from other regions of the country, but also the extremely difficult mountainous terrain, which impedes the connection of this region with the outside world.