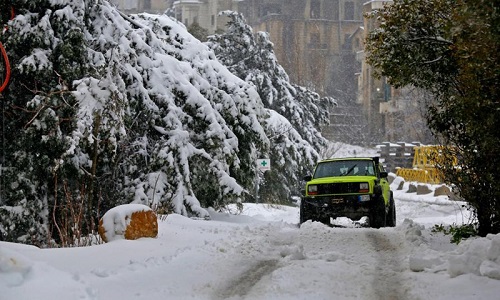 A snowstorm hit parts of Lebanon early this morning, hampering economic activity and forcing the closure of schools across the country, the state-run National News Agency reported.

The blizzard, dubbed Hiba, accompanied by strong winds and rain, blocked roads in parts of Lebanon early this morning, forcing the government to use bulldozers to clear snow from major roads.

The severe storm also forced the closure of the commercial and fishing ports of Tyre, as traffic was hindered and fishermen tried to remove their boats and nets from the port for fear of being damaged by the violent storm. It also disrupted commercial activities in the Bekaa Valley.

Authorities warned mountain residents not to leave their homes unless absolutely necessary and to equip their vehicles with metal chains.