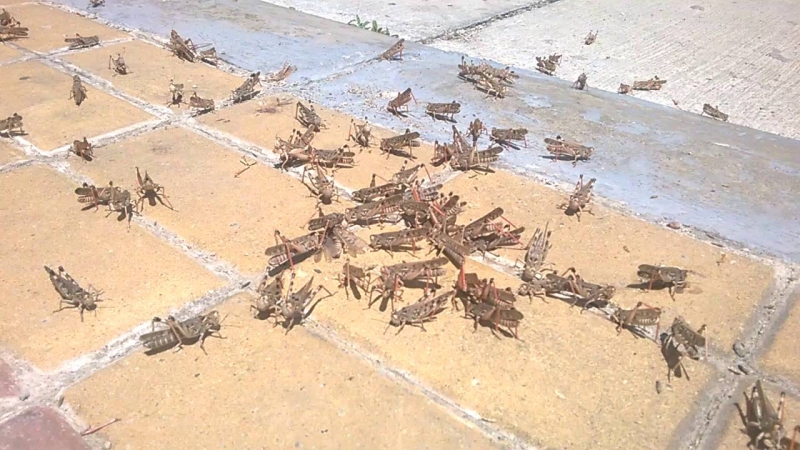 The black sea resort of Sochi is suffering from an unprecedented invasion of Moroccan locusts. These swarming insects are literally everywhere: they littered the sidewalks, they are swarming in the air.

Vacationers sudden invasion had not to their liking. The tourists, who settled on the outskirts of Sochi, unhappy with the way local authorities responded to the problem.

[Constantine, a tourist from Moscow region]:
“There are all sprayed with some thrips from something else, and in the area where he lived the athletes of the Sochi Olympics, no service”.

From the locusts, there is no salvation not only in the streets and the sea beach, but indoors.

[Constantine, a tourist from Moscow region]:
“Breathe in one air conditioner will suffocate. Have to open to air, so they fly”.

According to authorities, the locusts could not harm people. However, it poses a serious threat to all gardens.

In Russia the most widespread of Asian locusts. Foods are legumes, cereals and potatoes. The Moroccan locusts devours all the green, without exception. Huge swarms of these insects invaded the whole South of Russia.

Experts say that such a large-scale locust invasion was the first time in the entire history of observations. She migrates from Dagestan through the whole Krasnodar Krai. For breeding and laying eggs, these insects for some reason chose Sochi. If you do not destroy all the larvae, then next year the locusts can leave the city without vegetation.