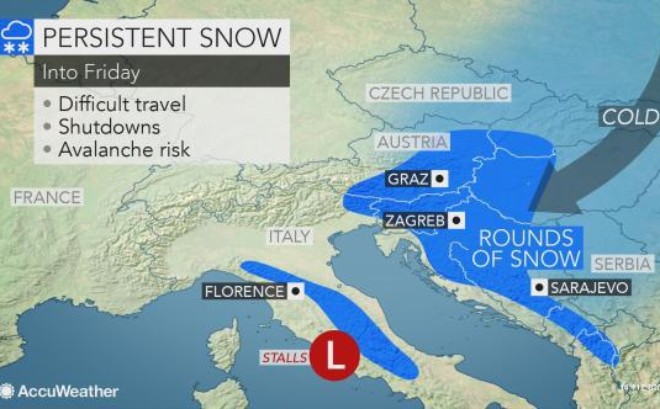 A powerful winter storm is approaching the countries of the Balkan Peninsula. In the coming days, heavy snowfalls will collapse on the areas located on the Dinaric Highlands in the northeast of Italy, Croatia, Slovenia, Austria and Hungary.

In Bosnia and Herzegovina, the central and eastern parts of Croatia, Slovenia, Eastern Austria and Western Hungary, the snow cover in places can reach 30 cm. It is expected that in Ljubljana (Slovenia), Zagreb (Croatia) and Graz (Austria) cm of snow.

Meteorologists warn that heavy snowfalls can lead to disruptions in the movement of road and rail transport, the cancellation of flights and the closure of roads. There are also power outages.

Strong precipitation from Wednesday to Friday is also expected in the Apennines in the central and northern parts of Italy. In some places, up to 30 cm of snow will fall, which will increase the risk of avalanches.

Meanwhile, in the coastal areas of the southern and eastern parts of Italy and the western regions of the Balkans there will be showers, there is a risk of flooding. In many areas of Italy, Albania, Montenegro, Bosnia and Herzegovina and Croatia, 25-75 mm of rain will fall.