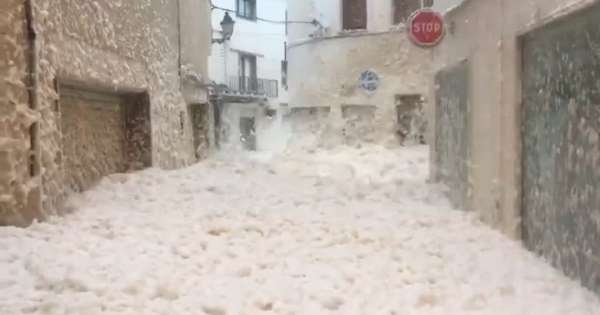 Hurricane Gloria, having struck Spain, raised such extreme waves that coastal cities were flooded with a layer of sea foam.

So, in the eastern Spanish city of Tossa de Mar, residents had to make their way to their homes along the bustling “foamy” streets. And on the island of Mallorca, giant waves reaching 13 meters in height covered buildings with a roof.

The hurricane came to Spain at the end of last week, January 19. If in the east of the country the elements caused floods, then in the north and in the mountainous regions heavy snowfalls took place.

To date, it is known about eight dead and dozens of injured. About 200 thousand Spaniards were left without electricity. In some areas, airports and schools were temporarily closed, and transport links were discontinued.

Andalusia, Valencia and the Balearic Islands suffered the most. According to experts, the region has not seen such destructive winter storms for 40 years.