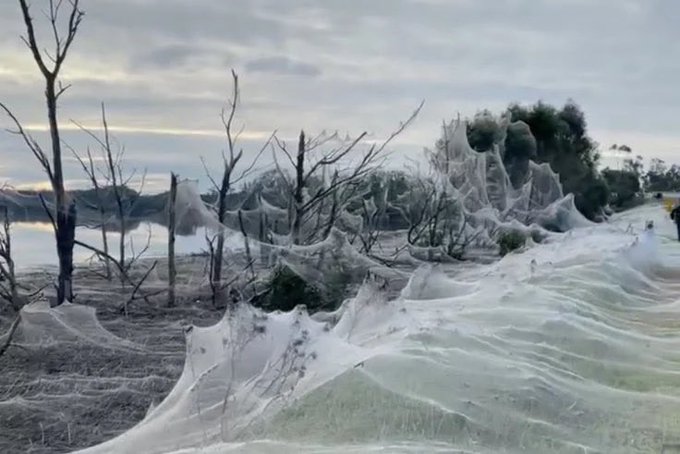 A rare phenomenon for Australia is now occurring in several parts of the country. Tens of thousands of spiders have taken over entire regions, a sight enough to frighten anyone.

Several areas of the Australian state of Victoria are covered in cobwebs after flash floods destroyed the nests and habitats of many small creatures like spiders.

As a result, tens of thousands of spiders are now fleeing to higher ground to escape the floods. Meanwhile, some parts of the country are also battling a “mouse plague” that is devastating local farms.

Dr. Ken Walker, senior curator of entomology at the Melbourne Museum, told the media that this is a semi-regular occurrence in Victoria during the winter. When a huge number of spiders are involved at the same time in a process called airborne, they cling to each other and can cover an entire region.

According to Walker, each spider only threw out one thread, meaning each tiny line of silk represents a separate insect. Although it looks creepy, experts say these spiders can help flood-stricken areas because they feed on mosquitoes and insects that cause dangerous diseases.

The spiders hovering near the town of Sayle are of the red and black Ambicodamus species. Although they are not dangerous to humans, they can cause minor local skin irritation when bitten.