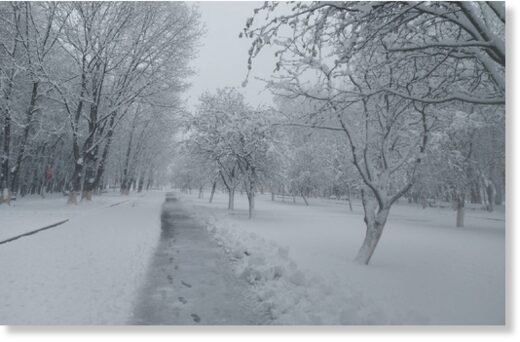 After a historically cold and record snowy winter, spring warmth has finally arrived in some regions of Russia, namely Siberia; or rather, it was before this week’s return of cold weather.

You could say that the last week of April was not only cold in and around the Moscow region, but conditions were akin to those seen in mid-winter, with significant amounts of snowfall.

The eastern regions reported the most snowfall, which remained on the ground for some time long enough for children to make snowmen and have snowball fights.

In Kashira, a blanket of snow covered the morning of April 28. And in Pavlovsky Posad, even more snow fell, “and we can already talk about records. In just a few hours, 17 cm of snow fell in the city – the highest amount ever recorded in the books, dating back to 1941.

As the morning wore on, the snow diminished to 9 cm, and by late afternoon there was no trace of it; however, in 80 years of records, “there had never been such snow cover in the second half of April.”

An even greater amount of snow was recorded in Plavsk, 20+ cm.