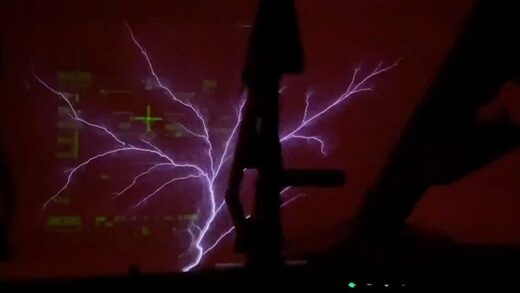 A rare weather event, a military aircraft of the 99th Royal Air Force Squadron was captured during a night flight through the Intertropical Convergence Zone (ITCZ) near the equator.

The 99th Royal Air Force Squadron has released footage of the rare weather event known as St Elmo’s Fire, filmed by the crew of a Boeing C-17 Globemaster III near the equator.

Squadron 99 tweeted that the incident occurred while C-17 was passing through the Intertropical Convergence Zone (ITCZ).

The lights of St. Elmo are a discharge in the form of luminous beams or brushes that occurs at the sharp ends of tall objects with a high intensity of the electric field in the atmosphere.

In the mountains, where the clouds almost touch the ground, this phenomenon is observed more often than in the valleys. St. Elmo’s fires are noted in deserts, during sandstorms, and during volcanic eruptions.

This is what the office looks like to a @99Sqn C-17 crew navigating their way through the ITCZ (Inter Tropical Convergence Zone) at night! The electrical weather phenomenon of St Elmo’s Fire isn’t dangerous, but it usually means you’re surrounded by storms! ⚡️#99Sqn #C17 #RAF pic.twitter.com/d1YrWUqMMR