State of emergency declared after flash floods in Utah and Nevada, USA 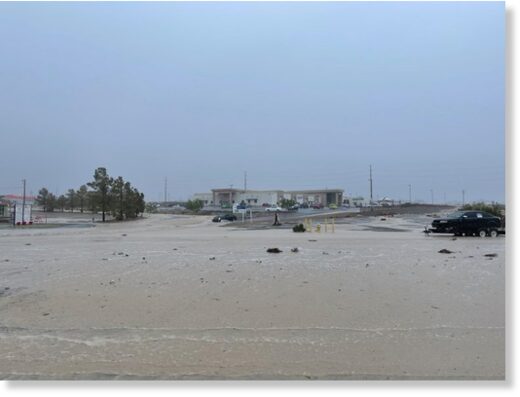 Heavy rains and flash floods have affected several states in southwestern America. A state of emergency has been declared in communities in southern Utah and Nevada. Both areas received from 40 to 50 mm of rainfall in 1 hour.

Two people are missing after heavy rains in New Mexico. At the same time, a teenager is still missing and a young child has died in separate incidents of flooding in Arizona over the past few days.

Heavy rain caused flash flooding in parts of southern Utah on July 26. Areas of Iron County and Cedar City were the hardest hit, where Mayor Maile Wilson-Edwards declared a state of emergency. In a statement, the mayor said: “According to preliminary information, our city received more than two inches (50 mm) of rainfall in about one hour. Which classifies yesterday’s storm as a flood with a frequency of about 500 years in some areas.

“The amount of rain in such a short period of time overwhelmed flood control structures and resulted in localized flooding in some areas of our city. Public infrastructure, private residences and apartments, businesses and churches were affected by the flooding. Some housing units were left uninhabitable.

The American Red Cross has opened a shelter for those who cannot stay in their homes.

Nye County Manager Tim Sutton issued a Declaration of Local Emergency on July 27, 2021, “as a first step toward obtaining assistance and reimbursement from the State of Nevada and federal partners for the damage caused to Pahrump by the Sunday night and Monday storms.”

The Nevada National Weather Service reported that 1.85 inches (47 mm) of rain fell in Pahrump during the July 26 storm. Most of that rainfall fell in less than an hour, according to AP reports.

Heavy rain and flash flooding were also reported in areas near Red Rock, Nevada, where 1.84 inches of rain fell during the storm.

Heavy rain caused flash flooding in Albuquerque, New Mexico on July 27, 2021. This is the second flooding in the city in a week when three people died after being washed into an arroyo (waterway) on July 20.

Under almost the same circumstances as July 20, rescue crews in Albuquerque were searching for two people who had allegedly been washed away in an arroyo northeast of the city on July 27.

In a July 27 update, the Albuquerque Fire Department said: “One victim found in the Washington and Cutler area was in the Embudo arroyo and was successfully rescued. Rescue crews are still looking for another victim.”

The young girl was reported missing after a flash flood in Pima, a town in Graham County, Arizona, on July 22, 2021. After a long search, the Pima Police Department reported that the girl’s body was found on July 26, 2021.

Meanwhile, a teenage girl was reported missing after her vehicle was swept away by flash floods near Cottonwood, Yavapai County, July 24. Verde Valley Fire, Cottonwood Police and Cottonwood Fire crews have dispatched search teams to find the girl. The search continues.

A flash flood July 25 led to the evacuation of people near the town of Taylor in Navajo County. The evacuees were able to return home.

Two people trapped in a truck caught in the floodwaters were rescued July 23 by the Maricopa County Sheriff’s Office Aviation Unit in Arizona.