State of emergency in Peru: forests and rivers polluted with mercury 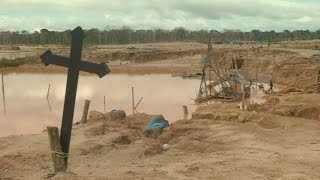 Authorities in Peru declared a 60-day state of emergency in 11 districts in the southeastern Department of Madre de Dios after experts found alarmingly high levels of mercury in the basin of the Amazon river. This is a highly toxic metal that fell into the river from illegal gold mines. It causes chronic renal and neurological disorders, particularly harmful for children and pregnant women.

The Ministry of environment stated that the level of mercury in blood samples taken from the local population, as well as in water samples taken from local rivers, was higher than allowed by law, which caused the emergency situation. Most of all from the disaster affected community Harakmbut, where the mercury content of more than six times the maximum permissible level.

Authorities say that environmental pollution by mercury can affect the lives of 50 thousand people. In the affected regions will be sent medical teams and food.

The Minister of environment of Peru Manuel Pulgar Vidal said that the impact of mercury contamination is subjected to 41 % of the population of Madre de Dios. However, this figure may be far from real. The effects of mining activities in this region, in his opinion, will occur over the next 80 years.

Peru is the largest gold producer in Latin America, however, 15 % of the gold is extracted in illegal mines. The Ministry of environment, said that illegal miners, who are mining gold, dropping 40 tons of mercury into the rivers every year. According to experts, they are also responsible for deforestation in the region of Madre de Dios. Destroyed almost 100 thousand hectares of rainforest.