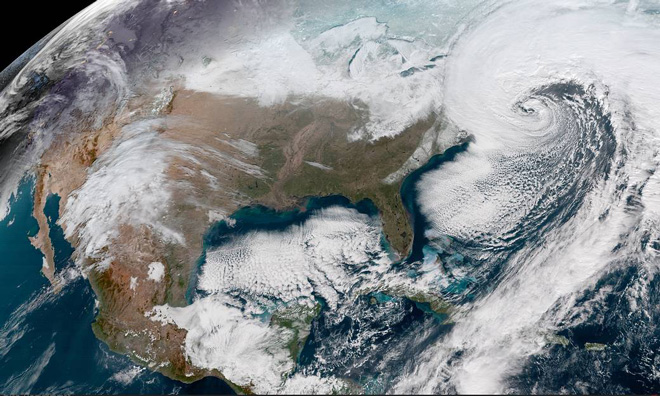 Water flooded the sidewalks and streets, trapped cars and blocked the metro station. The intensity of the flood that reached and perhaps even surpassed the strength of the storm of 1978 is due to the combination of the high astronomical tides caused by the Superlunah on Monday, the time of the landfall of the storm that brought the strongest winds on the coast at high tide, and the rise in sea level over the past several decades.

In February 1978, a winter storm that struck New England, updated records and killed 54 people. Then in Boston the waves reached 3 meters and higher. Made on Thursday photos of broken breakwaters and water pouring into the streets of the metropolis, terribly reminded of the strongest snowstorm of forty years ago.

The storm of 1978 was devastating. Cyclone equaled him on records and even beat some of them in just one tide cycle.
Floods have updated record figures in Boston, according to the National Weather Service.

The cyclone continues to rage, photos and videos posted in social networks show water flowing through the low regions of Boston, carrying huge pieces of ice. The metro station “Aquarium” was closed as a result of the flood.

In Twitter, the National Weather Service in Boston noted that although it will take several days for the water to leave, the worst is over. But the super low temperature, which will come next, will cause the water taken ashore to freeze.

Boston is not the only city in Massachusetts that is experiencing a flood. The same situation has developed in the cities of Salem and Gloucester.

Coastal floods also erupted in Maine, New Hampshire and New Jersey. Meanwhile in Baltimore the same cyclone brought powerful winds from the west, pushing all the water from the shore, which caused the lowest tide since 1997.

Mesovortices near the center of the deepening east coast cyclone, as seen by @NOAA's #GOES16 1-minute visible imagery. #blizzard pic.twitter.com/p4p7bMIWwm

WHITE OUT in Riverhead/Suffolk County, NY with this band dumping at 1-2"/hour with wind gusts 40+ MPH. Up to a foot of #snow followed by record sub-zero cold this weekend. #Grayson #frozenAmerica pic.twitter.com/B2Got7JCl0

#Blizzard2018 has gone to the dogs. (Well, one dog here, courtesy of Kristina Iverson of Red Bank, New Jersey. "Copper loves the snow!") Got a photo or video to share? Let us know using #SocialSnowPatrol pic.twitter.com/6Fteqk6Del

You can count on #wbz photographers Ron Mitchell & Terry McNamara. Pushing a driver out of a snow pile in #Worcester! pic.twitter.com/AUKz0TohGl