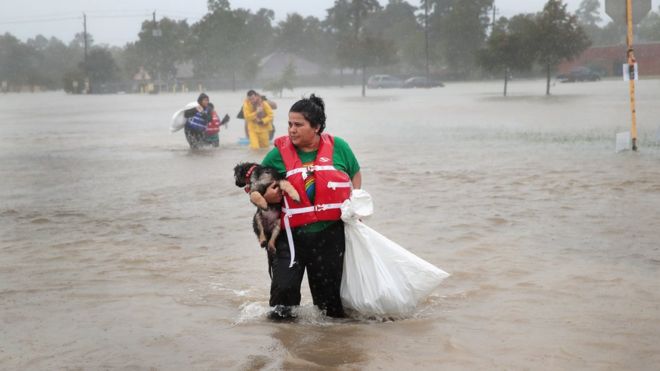 When listing the causes that caused the devastating hurricane “Harvey” climate change is not in the first place. However, there are some signs that suggest that there has been global warming. Hurricanes – a complex natural phenomenon, which is extremely difficult to predict, regardless of whether there is an increase in global temperature or not.

It is also extremely difficult to single out the impact of climate change on the strength of hurricanes with scientific certainty, because they happen relatively rarely, their frequency varies from year to year in very wide limits, and scientists simply do not have sufficient data for comparative analysis.

There are, however, facts about which we can more or less be confident.

There is a well-known physical law, it is called the Clapeyron-Clausius equation: according to it, an atmosphere with a higher temperature contains more moisture.

When the air temperature rises by one degree Celsius, the humidity increases by 7%. As a result, the rains in the warm air go more intensively.

Another element that we can talk about with certain certainty is the temperature of the sea.

“Now the water temperature in the Gulf of Mexico is about 1.5 degrees higher than the average between 1980 and 2010,” said Brian Hoskins of the Institute for Climate Change Studies at the London School of Economics in an interview with the BBC.

“This is very important, because as a result there are conditions for the emergence of a more powerful storm, and the fact that global warming has an effect on heating the water of the Gulf of Mexico is in general almost inevitable,” he says.

Many scientists have little doubt that there is a connection between the intensity of precipitation that continues to fall in the Houston area, with the ongoing climate change.

“It is precisely these kinds of phenomena – in the sense of more intense rains – that can be expected in a warmer climate,” says Dr. Fridericke Otto of Oxford University. “Looking at the intensity of precipitation [in the Houston area], it is reasonable to assume that it played some role Changes in climate “.

Lawyers for environmental matters are now debating vigorously: should such phenomena as Hurricane Harvey be considered as acts of nature beyond the limits of human control-the so-called “hand of the Almighty”, or is it aggravated by human activities, namely the burning of fossil fuels .

In their article published in the comments section of the journal Nature Geoscience, the article says that countries that do not participate in global attempts to limit such emissions to the atmosphere may be sued.

So far, however, attempts to bring someone to justice for natural phenomena have ended as a rule, to no avail.

But lawyers from the companies Client Earth in London and Earth and Water Law in Washington, believe that soon everything can change.

According to them, a new discipline, known as the attribution science, will allow the courts to determine with sufficient accuracy that certain specific events have occurred or been exacerbated by climate change caused by humans.

They also believe that in the future, state authorities or enterprises will be successfully prosecuted if they do not go on reducing greenhouse gas emissions.

However, the question remains, why the storm in Texas was so long. It is because of this duration that many areas were flooded.

Some researchers are also inclined to see the consequences of climate change here.

Professor Stefan Ramstorf of the Potsdam Institute for the Study of Climate Change says that the cause of the overall slowdown in air circulation in the atmosphere at mid-latitudes may be climate change in other regions of the Earth.

“This is the result of a disproportionate warming in the Arctic, which leads to the fact that weather systems become less mobile and stay longer in the same region, which in turn can exacerbate phenomena similar to those that we observe in Houston,” says he.

However, it must be said that similar “slow-moving” storms were repeatedly noted in Texas in the past.

The tropical storms “Claudet” in 1979 and “Allison” in 2001 did not go away for a long period and were accompanied by powerful downpours. Accordingly, some scientists believe that linking slowly moving “Harvey” with changes in the climate is already a bust.

“I do not think it’s worth speculating on the relationship between such complex and insufficiently studied processes as, for example, warming in the Arctic, and current phenomena, until a more thorough study is carried out,” says Dr. Friederike Otto.

Experts believe that when talking about events such as Hurricane Harvey, one should remember not only the rise in temperature – both air and sea water – but also about changes in air circulation in the atmosphere.

Sometimes changes in temperature and in the air circulation compensate each other. Sometimes they reinforce reciprocal changes. In order to fully understand how this mechanism works, it will take a lot of effort and cost.

“Speaking of hurricanes, we need to understand how they can develop in the real world, and how they could develop in a world where the climate does not change,” says Dr. Otto. “But time after time to repeat modeling with a high degree of resolution – doing extremely Expensive. ”

Meanwhile, other researchers say that we all do not look at this problem at all.

Regardless of whether human activity affects the climate on Earth, thus aggravating the hurricane Harvey, they believe that the contribution of humanity to this particular catastrophe can be explained easily and easily.

“The disaster is the condemnation, that the Houston population has increased since 1990 by 40% The catastrophe is that too many people in too poor and can not afford to purchase insurance.”, – he says.

“It is not climate change make people build houses near the coast, the storms that strike – he says -. And the fact that the natural phenomenon turns into a catastrophe – the result of our own choice, which has nothing to do with climate change.”