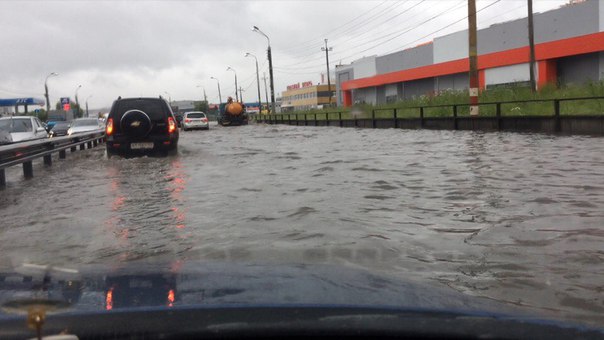 As a result of rain in the Lower flooded tram lines so that the trains could not move. A road in the center of the city was blocked by a landslide. While utilities were removing a huge layer of land – public transport and cars had to search for bypasses.

For today in Nizhny Novgorod one third of the monthly norm of precipitation fell. Most of all – in the Sergach district – almost half the monthly rate. In the morning in Gordeevsky micro district trams have risen, the Cableway is not working all day.

The weather test. Only in the middle of the day more than 300 applications from Nizhny Novgorod entered the single dispatching service. First of all, the onslaught of the elements can not stand the road. Here cars cut the waves along the Barbarous street. Other video – cars sail through the flooded bridge in the area of ​​the street Business. In the center of Nizhny Novgorod – near the Black Pond – transport literally hides rainwater. Flies Meshchera and Komsomol highway. Machines stall in the water – eyewitnesses write – formed many hours of traffic jams.

The downpour led to a landslide at the Zelensk congress. From the roadway workers removed the layer of land almost 20 centimeters. Because of the disaster, all road repair work has been suspended. Throughout the city, the wind pulls out the trees with roots. They block roads and damage cars.

“There are more than 20 units of equipment for pumping water on the territory of the city – brigades were planted along the trees, the most affected was the river part by the number of precipitations – over 6 days the standard was exceeded by 20 percent,” notes Sergei Mironov, deputy head of administration Nizhny Novgorod.

Therefore, the consequences of “October in July” – say weather forecasters – are already taking a dangerous turn.

“In the area of ​​Pavlova, according to the meteorological station, and in the Shahuni area – a dangerous agrometeorological phenomenon – waterlogging the soil, saturated with moisture, not only the upper, but also the lower layers of the soil, which leads to poor plant development,” explains Olga Mokeeva, head of the weather forecast department Nizhny Novgorod Hydrometeorological Center.

Bad weather made adjustments to the work of social institutions. So, in kindergartens, classes with children are completely transferred to the premises. “We spent the entertainment” Visiting the sun “- the sun was calling to us, so that the rain left, and the sun was,” – says Natalia Podgornova, head of MBDU Kindergarten №267.