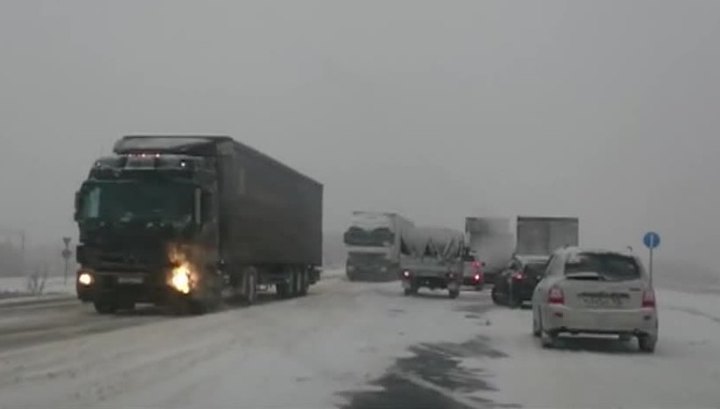 In the Chelyabinsk region, policemen evacuated two buses with children from a multi-kilometer traffic jam. It was formed on the federal highway M5 due to heavy snowfall. The road is more like a skating rink. Because of what the passage for trucks is closed. To remove children from traffic jams, DPS inspectors blocked one of the oncoming lanes.

Snowfall in the Chelyabinsk region continues for the second day, and the ban on the movement of trucks along the M5 highway from Ashi to Miass, again this time until 3 pm local time, is renewed.

According to news agencies, two buses with children arrived in the Satka area yesterday afternoon in the traffic jam, only 36 people. One of the buses was traveling from Togliatti, there were ten-year-old children. In the second – 15-16-year-olds. They were rescued from the traffic by nine DPS crews. To do this, the police blocked traffic on one of the oncoming lanes and organized the evacuation of stuck cars. The buses escorted on the most difficult part, to the cafe. Children are fed, and by this minute they must reach their destination.

We also know of three traffic accidents due to snow and ice. In the Chebarkul region, two drivers, failing to manage, got into the ditch, another accident occurred when overtaking on the opposite lane.

In the traffic police ask drivers without the need not to go to the track. Those who have caught the bad weather en route are reminded of the emergency telephone numbers from the mobile phone – 101, 112. Heating points work on the routes. There is a clearing of roads. Crews of DPS work in a strengthened mode. According to the forecast of weather forecasters, snowfalls will continue in the region. By evening it will get colder.