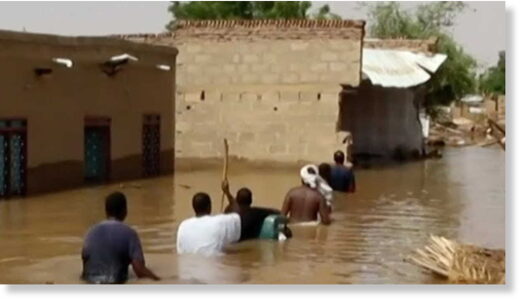 The Sudanese Security and National Defense Council declared a state of emergency throughout the country for a period of three months on Saturday due to severe floods caused by rains. Following the meeting on Friday evening, the government of the country recommended declaring an emergency situation in the country, the Sudanese information portal Al-Majhar reported.

The rainy season, traditional for this time of year, led to the largest rise in the level of the Nile in a century. According to the Department of Civil Defense and Emergency Situations, on Saturday the level of the river reached 16 m 28 cm, which is 91 cm higher than in the same period last year. On Friday, for the first time in several weeks, the Nile level dropped by 16 cm.

The rise in the level led to floods that claimed dozens of lives and left residents of entire villages and towns homeless.

According to the Ministry of Labor and Social Development, 16 out of 18 states (provinces) of Sudan suffered from torrential downpours and floods, 99 people were killed, about half a million citizens were affected. The waters of the Nile flooded large areas in and around the capital, Khartoum. In the Northern Province, more than 1,000 residential buildings were washed away, and entire villages in the southern regions of Sudan disappeared in streams of muddy water. The disaster affected almost all regions of the country, millions of people lost their homes and were forced to leave their homes.