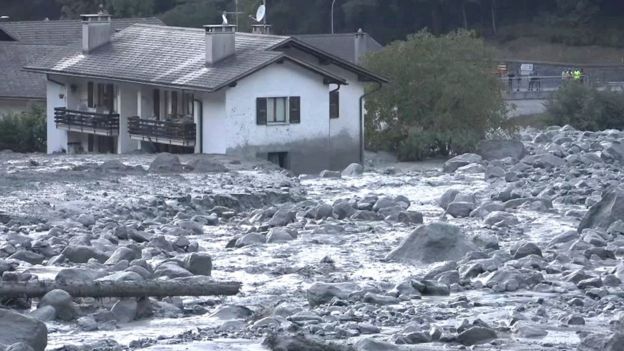 In the Swiss village Bondo knew about the danger and prepared for it. And when nature struck, their fortifications stood at the pressure of four million cubic meters of clay mixed with stones.

Two-thirds of Switzerland’s territory is a mountainous area, and people have long since adapted to protect themselves from avalanches and landslides.

However, the scale of what happened on August 23 in the remote Alpine valley of Val-Bondaska in the Swiss canton of Graubünden made scientists talk about a new reality in which such disasters will occur more often.

On Saturday, rescuers stopped the three-day search for eight missing tourists: four Germans, two Swiss and two Austrians, who went to Chengalo Peak on the day of the rock fall.

Followed by a landslide stopped near the village of Bondo, from which about 100 people were evacuated.

The repeated rockfall on Friday interrupted the rescue operation, and the authorities do not rule out new cataclysms in the area popular with fans of mountain walks and ascents.

Before the tragedy, the sensors installed at Chengalo Peak on the Italian border showed a shift in the rocks, and the authorities partly blocked the roads in that area.

The consequences of the ensuing collapse would have been much more tragic, if the village had not been protected by a concrete dam, and the riverbed had been extended in advance.

Scientists have warned that nature will not stop there. The reason is simple: the Alpine highlands are getting warmer.

Marcia Phillips is engaged in permafrost in the Swiss Institute of Snow and Avalanches.

“We drilled all kinds of rocks at different altitudes, and the rocky areas show noticeable warming over the past 10-20 years,” she says.

There would be no problem in this if the alpine stone was homogeneous. But Swiss rocks are not the case. They are layered and porous, and the cracks in the rock are packed with ice.

“Permafrost plays a stabilizing role, and if the temperature rises above -1.5 ° C, problems will begin,” Phillips said.

The damage from global warming is not limited to this. The Swiss glaciers also suffered significantly.

For thousands of years, the cliffs of Chengalo Peak have supported the glacier from below, but in recent years, it has retreated noticeably. The mountain became so unstable that Phillips and his colleagues refused to go up in favor of remote studies.

“There are all in the cracks, all the rocks are alive and unstable,” she says. “It was too dangerous to work in such conditions.”

The melting of perpetual ice at a height is fraught with risks for winter tourism, since the lift supports are often installed on permafrost.

The Swiss authorities have already tightened the regulation and ordered the owners of the ski infrastructure to constantly check the stability and reliability of the structures.

Phillips admits that with a further increase in temperature, the key industry for the Alps may suffer.

“I do not exclude that some will have to be closed or rebuilt,” she says.