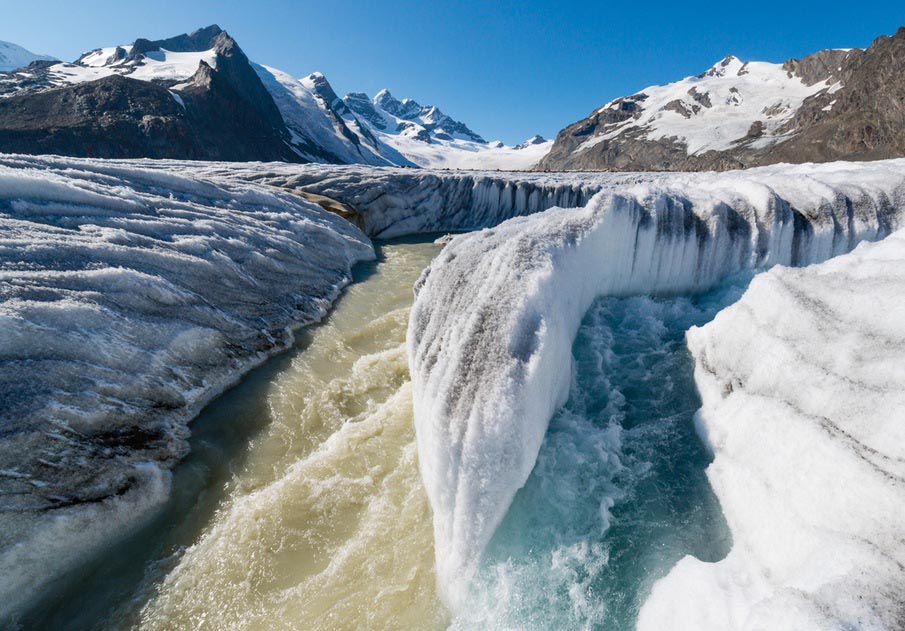 The famous Aletsch glacier is melting faster. When you look at this magnificent miracle of nature it’s hard to believe, according to experts, by the end of the 21st century it may disappear completely. But the melting of the eternal ice is only one of the consequences of global warming impact on Alpine landscape of Switzerland.

The Aletsch glacier is among the most significant in Europe. Its length is 23 km, average width 1.5 km, and the depth can reach sometimes up to 900 m. Beginning it takes in the region of the Jungfraujoch at a height of 4 thousand meters above sea level. The glacier looks like a giant stationary. However, this impression is deceptive. Ice mass of the glacier slides into the valley at speeds up to 200 meters per year. Aletsch and recently broke another record.

Up here, on top of Moosfluh, the height of which reaches 2 333 meters above sea level, no one can hear, as slowly but surely, a glacier melts, as the wall still ice turns slowly, drop by drop, into the water stream. Nevertheless, it really is: a drop hollows out a stone, and the glacier is even more so. “Over the past 40 years, the length of the Aletsch fell by 1 300 metres. He became not only shorter, but still at 200 meters thinner,” says Laudo Albrecht (Laudo Albrecht, Director of the Aletsch centre (Zentrum Aletsch) with the Swiss conservation organization “Pro Natura”.

This year the Centre, which guests have each year to 17 thousand tourists, celebrates its 40th anniversary with exhibition, without any embellishment show the changes in the environment of the region over the past decade. Laude, Albrecht grew up in these parts, working in the Center for 30 years. He is direct and immediate witness to dramatic changes in the nature. “From all this I feel just bad. The Aletsch glacier is part of the region. As a friend, whom I know well, and who quietly dies,” he says.

And then it can be even worse. If the glacier will continue to melt at the same rate, by the end of the century its area will be reduced from the current 118 square kilometers to 35 square kilometers, and its volume can be reduced by 1.7 cubic kilometers, that is, it will be less then 10% of today’s volume. This is evidenced, in particular, experts of the Federal office for the protection of the environment of Switzerland (Bundesamt für Umwelt — Bafu, structural subdivision of the Department (Ministry) of environment, transport and communication — UVEK). “By the end of this century, all the glaciers of Switzerland, will disappear,” almost sure L. Albrecht. “But the Aletsch area without a glacier is like a ski resort Zermatt without the Matterhorn”.

Where the glacier has receded, it is already visible small landslides. The geological conditions in this region are very difficult here, faced two tectonic plates, causing mountains are set in motion, which creates problems for construction firms serious problems. It is because of these seemingly subtle geological changes in 2016 the old cable cars leading to the mountain Moosfluh, had to be replaced by modern and innovative design in the next 25 years will have to cope with horizontal transfer of mining sediments in 11 m and they rise to the additional 9 meters.

Swiss scientists have concluded that after the final disappearance of the Aletsch glacier in its place will be a lot of small lakes, which, combined with other potential risks, such as floods and landslides, going to be the settlements located below on the slopes, the most immediate threat. Tectonic movement and mountain formations can cause catastrophic events, such as unexpected floods.

In any case, in the next 50-100 years mountain regions of Switzerland directly experienced the results of global warming, and these results are not always positive. In particular, it is assumed that the local Alpine flora come under attack not only higher, unusual for the high temperatures, but tough competition from so-called “invasive plant species”, received in the result of the warming a chance to win a new habitat.