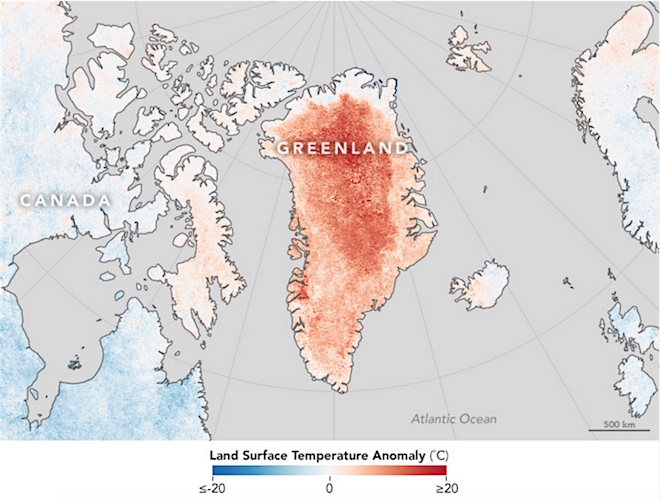 April in Greenland, usually a very cold month, but the climate of recent years breaks this trend. For example, in 2012, the ice sheet began to melt quite early, and then was the most extensive melting since the first satellite observations in 1978. Weather events and temperature anomalies in the last month suggests that 2016 may be similar to the season four years ago.

The above map shows the surface temperature for April 2016 in comparison with a mean of 2001-2010 for the same month. The red marked area where it was warmer than average, and some areas were warmer by as much as 20 °C. In the areas, colored in blue, the temperature does not exceed the average level. White designated area, where the recorded temperature is normal, and grey areas, of which you were not able to collect enough information, perhaps due to cloud cover.

This map of temperature anomalies based on data obtained via the MODIS instrument of the NASA satellite “Terra”. The surface temperature (LST) reflects the heating of the surface under the action of sunlight and may differ significantly from the air temperature.

“The most surprising incredible deviation in average temperature from its indicators for the period from 2001 to 2010, especially in the Central part of the ice sheet. This is compounded by the fact that in the Northern parts of the US and Canada were colder than usual,” explained Santiago de La peña, researcher at Ohio state University.

According to de La peña, an area of high pressure was located over the ice sheet for almost all of April. This resulted in an increase of temperature in the Greenland, reaching record highs in many places. Earlier warming was a random, was a local and not as intense.
However “hot event” in Greenland are not completely unprecedented. Research Dorothy Hall, a specialist space flight Center the NASA Goddard) showed that such extensive melting has happened in 2012 and 2002.

De La peña believes that such cases will become more common in the future as atmospheric warming in the Arctic leads to an increase in seasons of active ice melting. Currently, as the scientist believes, it is too early to make predictions for 2016. “In may there is still a high temperature. Perhaps, this heralds a major melting over the summer,” he said.