Than the danger of melting of permafrost 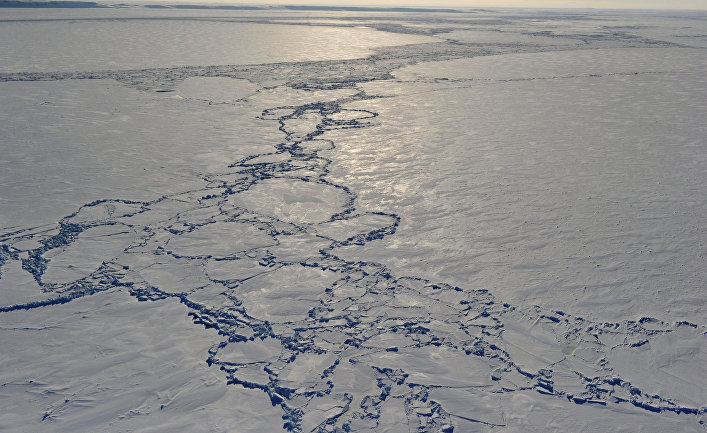 A quarter of the entire earth in the northern hemisphere is constantly in a frozen state. But the warming of the climate leads to the melting of permafrost, which releases greenhouse gases, which further accelerate this process. Report from the Lena delta.

Moving among the 1,500 islets in the Lena delta requires perfect concentration: one eye needs to look at the radar in order not to run aground, and others to follow the landmarks that dot this endless space of water and land. Before flowing into the Laptev Sea in the north of Siberia, the river is poured so widely that its banks turn into foggy strips on the horizon.

Samoilova Island stands out located on the shore of a wooden hut, where the scientists and gamekeepers of the reserve live, which covers the mouth of the river and the slopes of the Kharaulakh ridge. Only slow, but irreversible erosion threatens to immerse the house in the waters of Lena. In the future, the whole island may disappear: a strong rise in water as a result of the spring melting of ice blurs its shores.

Be that as it may, the main blow to this island area of ​​5 km2 is the retreat of permafrost under the onset of climate warming. These are soils, the upper layer of which thaws in the warm season, while keeping the temperature below zero for at least two consecutive years.

“Samoylova’s ecosystem is threatened with potential destruction,” the article on Biogeosciences says. Coordinated research German Julia Boike (Julia Boike) and her colleagues from the Institute of Polar and Marine Research. Alfred Wegener (AWI) is not going to put up with such a prospect.

Every year from April to September AWI staff and their Russian colleagues from the Arctic and Antarctic Research Institute and the Permafrost Institute go to Samoilova Island to study the changes in soil and landscape, as well as the relationship between climate warming and permafrost thawing.

The island on which the modern research station is located (financed by the Institute of Oil and Gas Geology and Geophysics) is becoming a favorite observation point: permafrost occupies 95% of the area of ​​Siberia and two thirds of the territory of Russia. In general, the frozen ground accounts for a quarter of the entire northern hemisphere, mainly in Alaska, Canada, Greenland, Russia and China.

Western Europe is distinguished by permafrost of the Alpine type, which occurs in a number of mountain ranges. Its structure and geodynamics differ from frozen soils in the northern latitudes, but it is also sensitive to climate change. So, on August 23, the movement of the soil as a result of melting permafrost carried away eight people near the Swiss village of Bondo.

“In some places the Siberian permafrost was formed a long time ago, even during the Pleistocene period (from 2.6 million years ago to 11,000 years ago),” says Julia Boike. “It is very cold, about -9ºС, and goes to a depth of almost 1,500 meters in the north of Yakutia.”

“On the island of Samoilova it is characterized by relative stability and a high content of organic substances with the presence of peat bogs,” she adds, putting on thick rubber boots, without which it is impossible to walk on the viscous tundra covering the island’s surface. Accompanying her young scientists are sent along with her on the Kurungni. On the neighboring island there are complex ice formations, and its relief is formed by thermokarst deposits (obtained as a result of settling a long time of frozen land).

The valleys, for which AWI scientists have been walking for six hours, are riddled with streams. “We want to understand whether this water is taken from seasonal precipitation or as a result of melting of ice when the soils change,” explains geomorphologist Anna Morgenstern (Anne Morgenstern). At her hand is always ready for a notebook, and the backpack is filled with samples of water.

The melting of permafrost in Siberia and in other regions where scientists conduct measurements, is a confirmed fact. Thanks to the Russian-German group of specialists located in several wells (some drilled to a depth of 100 meters), it was possible to register a temperature increase of 1.5-2 ° C since 2006.

“We are seeing a trend towards warming of the soil and an increase in the temperature of the air in the winter,” confirms Julia Boyke. “The change in the temperature component is reflected in the entire balance of energy flows, water and greenhouse gases.” An alarming conclusion, considering that the Arctic is involved in regulating the entire earthly climate.

In the laboratory of the research station (it maintains a stable temperature with the help of three deafening roaring generators), scientists are considering schedules of greenhouse gas emissions into the atmosphere. Methane peaks occur during the summer, but data analysis remains a challenge at such high latitudes. The first period of measurements (2002-2012) was conducted without automated equipment, which has a modern database put into operation in 2013.

Three years earlier, during a visit to Samoilov, President Vladimir Putin considered that Russian-German cooperation on permafrost deserves a more efficient infrastructure. Until that moment AWI staff (their first expedition to the island was held back in 1998) had to be content with a minimum: to sleep in tents, to warm themselves with firewood (from the forest descending along the Lena River) and use the huntsman’s hut as a headquarters.

The pace of the process

Wintering was impossible then. “We simply could not collect data in the winter,” says Torsten Sachs. “We had to add fuel to the external generator once every three days at -40 ° C in the polar night.” Other difficulties with the interpretation of data look much more familiar. Ten years is too short a period to identify changes in the trends of gas flows in the long term. In addition, we need to increase the number of observation posts, which is by no means so easy to achieve in Siberia, which is 20 times more than France in terms of area.

At a fair distance from the station painted in the colors of the Russian flag, the AWI team is completing the construction of the iglu, where in 2018 the computer and electronic equipment of the new meteorological tower will be located. A fiberglass cocoon should create the necessary conditions for stable measurements, creating a shelter from the ferocious winds and blizzards of the Siberian winter. Like other buildings on the island, the needle stands on piles, so as not to depend on the movement of the soil. So, at the first meteorological tower the earth sank by 10 centimeters per year.

“There is no longer any doubt about the relationship between climate warming and the melting of permafrost,” says engineer Peter Schreiber, a needle-occupied engineer. “Now the question is how fast the permafrost will continue to melt, and how nature will react to this process.”

Nature is the main steward in the conditions of the changes taking place in Siberia, Fedor Selyahov notes. The head of the research station admits what happened around the change: “So, for example, 20 years ago there was not a single tree, but only a typical vegetation for the tundra. During the trip to the delta last year, I saw trees 2 meters high. ”

Whatever it was, this native of Yakutia from the banks of Vilyui does not believe in the anthropological causes of climate change. “This is a cycle of nature. It was warm here 100 years ago, then it became cold, and now the next warming season begins, “he says in his office, which adorns the fossils found in the vicinity.

As for the permafrost, “it probably melts, but slowly.” “When we get the mammoth tusk out of the soil, we understand that the other end is still in the ground, is still frozen. This is a sign that the permafrost remains very cold, “he continues. An unexpected consequence of the melting of soils in the far north was the development of hunting for ancient remains.

Günter Stoof (nicknamed “Molo”) understands the attitude of his Russian friends. “Nature decides, not man,” says the AWI technician, who was most of the time on the island. Now he is 65 years old, and he swears that this season will be the last in his career (48 expeditions to the Arctic and Antarctic). This native of East Germany was the youngest member of an almost two-year Soviet expedition (1975-1977), which was commissioned to build a base in the Antarctic. He had more than once visited the polar regions, both alone and in groups.

His life path reflects another story, the cooperation of the GDR and the USSR during the Cold War. After the fall of the Berlin Wall, a scientific committee was formed, which was commissioned to determine the program of scientific research of the united Germany. He recommended the preservation of the polar direction and its alignment around the AWI research group in Potsdam. “It included specialists such as Molo and Christine Siegert, who had 20 years of experience in the study of permafrost through joint work with the USSR,” explains Anna Morgenstern.

The study of frozen soils became widespread in Russia at the beginning of the 20th century in accordance with Moscow’s strategic decisions. The policy of developing rich in hydrocarbons and other natural resources of the eastern and northern regions could not be carried out without the construction of the Trans-Siberian Railway. Whatever it was, to implement this project, it was initially necessary to form an engineering science about the ubiquitous here frost.

In the late 1930s, the Permafrost Institute was established in Moscow. In 1960, he was moved to Yakutsk. This large East Siberian city also stands on frozen ground. Two underground galleries (at a depth of 4 and 12 meters) at the base of the institute give “direct” access to permafrost. The sand layers tell about the geological history of the city, which was built on the alluvial sediments of Lena.

Heavy doors allow you to keep the temperature below zero. “The melting of permafrost is a threat to the planet, but on the scale of Yakutia, everything is still fairly stable,” explains the director of the institute, Mikhail Grigoriev. “At the same time, the consequences of melting are more noticeable in other regions, especially in Yamal.”

After the abnormally warm summer of 2016, an epidemic of anthrax began on the peninsula (the first case since 1941, according to the Moscow Institute of Epidemiology) in connection with the melting of permafrost, in which the pathogen was located. In addition, the newspapers again started talking about the Yamal-Nenets Autonomous District after the discovery of volcanic depressions. They also became a consequence of the melting of permafrost. “The region is rich in gas. When melting, the soil releases bubbles of gas, which explain these explosions, “Mikhail Grigoriev believes.

At the same time, no case of this kind has been registered to Samoilov Island, Alaska or the north of Canada. The Global Monitoring Network of the cryolithozone collects data from more than 250 objects. Its goal is “to combine knowledge, and also to confirm new climate models,” notes AWI employee South Lantuy (Hugues Lantuit).

In addition, the research of alpine permafrost is gaining momentum now. The European Conference on Permafrost scheduled for June 2018 should report on this work, which was actively developed in Switzerland, but is still in its infancy in France.

Another source of concern is coastal erosion and its socio-economic consequences: one-third of the entire coast in the world is in the permafrost zone. In the Laptev Sea and the Beaufort Sea (North America), the erosion of the coast can reach eight meters per year, which causes nearby villages to think about moving houses. On the island of Samoilov, the coastal wooden hut is still in its place. But how long will it last?