“The agony of Omaira Sanchez” 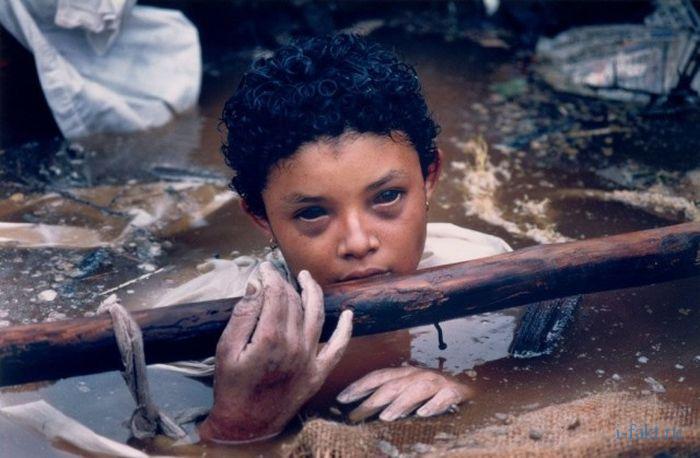 November 13, 1985 near the Colombian city of Armero erupted Nevado del Ruiz volcano. Lava flows from the crater hit the mountain glacier, mudflows formed from instantly melted ice and volcanic ash, which streamed down the river valleys cascading. Moving at a high speed (6 meters per second), the first wave captured most of the city of Armero that was on the way.

On the night of the disaster, 13-year-old Omaira Sanchez and her family were awakened by the noise of an approaching mud stream. In the blink of an eye, Omayra was under the rubble in her own house. For a long time the girl could not be found, because it could not be seen from above because of concrete slabs. Having reached Omaira, the rescuers managed to move the plates, but could not release them from the debris.

The child was fed, even put a dropper. To save Omaira, they needed a powerful pump to drain the water, so that the crane could move apart the fragments of the house without drowning the child. On a special helicopter, rescuers brought a pump from Bogota to Armero, but all efforts to snatch Omaira out of this hellish trap were unsuccessful – the pump proved to be faulty, and there was almost no time left.

The girl was dying in front of the rescuers. The adults were shocked by her calmness. She knew that under her feet were the bodies of the relatives killed by the village. The struggle for Omaira’s life lasted 60 hours, and all this time she did not lose her presence of spirit. Noticing that the rescuers are tired, the girl suggested: “Go get some rest, I’ll wait.” Three nights of Omaira stood in the water, on the fourth day she died, and did not wait for salvation …

Naturally, the rescue operation was attended by journalists from many countries, one of them – the Frenchman Frank Fournier and took pictures of a small Omaira shortly before his death. His photograph, which was called “Agony of Omaira Sanchez” flew around the world, provoking a contradictory reaction in society. Fournier was called a “vulture”, to which he objected, stating:

I felt that this story was important for my reporting, and I’m very happy that there is such a reaction, it would be worse if people did not worry about it … I believe that the photos helped raise money from around the world to help and helped Show irresponsibility and lack of courage of the country’s leaders.

Later, the scandalous picture was recognized as a 1985 photograph by World Press Photo.

The video of communication with the rescuers, where Omira smiled, was distributed in all media. Rescuers and humanitarian workers told about her “courage and dignity” who gathered to support and pray for her.

As a result of the tragedy, due to mudflows and untimely assistance, about 23,000 people were killed and 14 towns and villages were destroyed. After the death of Omaira and the uproar in the press, the blame for the tragedy of Armero was laid on the Colombian government, carried away by civil war, who showed inaction and did not pay attention to reports about the forthcoming volcanic eruption. The city of Almero no longer exists, in its place is the memorial of the catastrophe. There is a small monument to Omaira.