The air pollution in Delhi exceeded the norm by 15 times 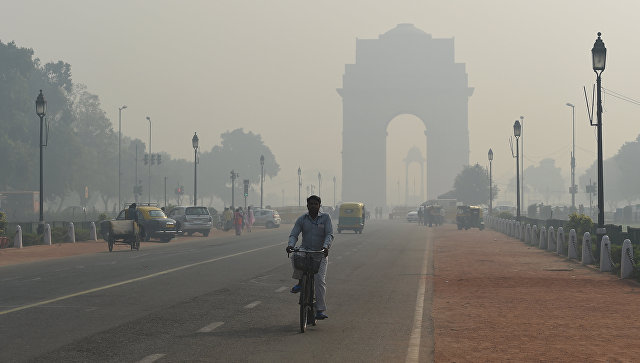 The level of air pollution in the Indian capital of New Delhi exceeded the norm by 15 times on Friday after the celebration of the Hindu festival of Diwali, known as the “festival of lights”, according to the data of the Delhi Control Commission for Pollution.

The day before in India celebrated one of the main holidays of the country Diwali, one of the main attributes of which is crackers, firecrackers and fireworks, which, it is believed, “drive away the demons.”

According to the New Delhi Pollution Control Commission, PM10 (airborne particulate matter with a diameter of less than 10 microns) reached its peak at Punjabi Bagh control station in the west of the city – the indicator was set at about 1600 micrograms per cubic meter at 23.00 Thursday and remains at the level of 1586 as of 08.00 on Friday (the difference in time from MSK is 2.5 hours) at a rate of 100 micrograms. At the same time, the minimum indicator at this station for the last 24 hours was only 145 micrograms per cubic meter.

The maximum level of PM2.5 (the airborne content of suspended particles with a diameter of less than 2.5 μm) is noted at the Ramakrish Puram station and at the Dhyan Chand stadium in the south of the city – 878 and 985 micrograms per cubic meter, respectively, at a rate of 60 micrograms . The indicators fluctuate depending on the station location due to different population density, relief features and other factors.

According to the Air Quality Index monitoring system, the air pollution level in India is 999 units in several areas of the Indian capital, including in the diplomatic quarter. This corresponds to a dangerous level of contamination, in which it is recommended to avoid being outdoors.

It should be noted that the level of pollution this year was less than the year before, when on the night of October 31, also after Dawali, PM10 contamination exceeded the norm by 42 times, exceeding the level of 4000 micrograms per cubic meter. Presumably, this decline is due to the fact that the Supreme Court on the eve of Diwali imposed a ban on the sale of pyrotechnics in Delhi with the expectation of assessing the quality of air will affect the celebration of Diwali without fireworks. But the court at the same time allowed the use of pyrotechnics, which was acquired before the ban was introduced.