The air quality in California reached a record low level 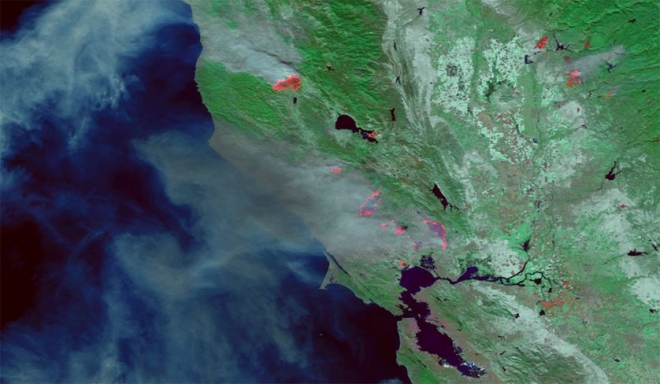 Despite the efforts of 8,000 firefighters who are fighting 22 fires across the state, the natural disaster shows no sign of weakening. Over a week, the fire spread to 68.7 thousand hectares, 3.5 thousand buildings were destroyed and about 20 thousand people were evacuated. As of Wednesday evening, only 10% of the major foci of the flames were localized.

With this burning scale, the air quality indicator in areas where fires are burning has reached a level never fixed before. In the districts of Napa and Sonoma, where the flames destroyed tens of thousands of hectares, the level of suspended particles exceeded 200. At this level of danger, not only patients and children, but all who breathe this air, are exposed.

In the San Francisco Bay area, where the authorities recently extended the smoke warning until Sunday, the haze from wildfires was so thick that schools were closed, flights canceled, and residents were advised to wear respiratory masks. As you can see on the time-lapse video below, the smoke “strangled” the Bay of San Francisco.

For two days, natural fires have thrown in the air as many pollutants as all vehicles of the state produce for the year. The level of suspended particles is so high that it is equal to or exceeds the air pollution index in Beijing.

Smoke will remain at least all weekend on most of the territory suffering from fires.