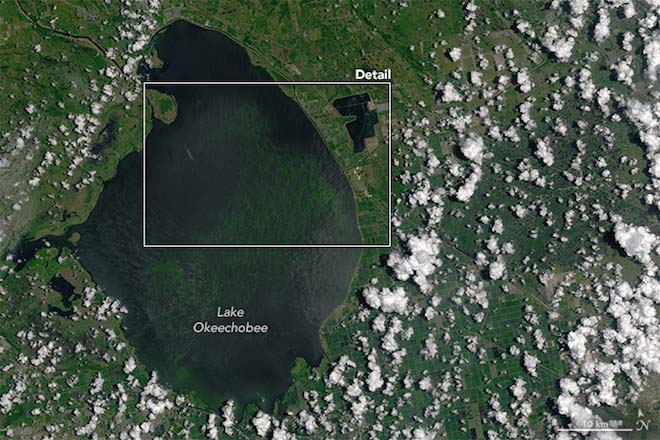 Part of the us state of Florida called the Treasure Coast (Treasure Coast) suffering from the onslaught of the algae blooms. In the picture from space, received on 2 July by the NASA satellite Landsat 8, one can see a rapid proliferation of billions of blue-green microorganisms in the largest freshwater lake in Florida.

The first algal bloom was observed in lake Okeechobee in early may. Fueled by agricultural waste, the vegetation covered about 600 square kilometers, accounting for about one third of the pond.

Earlier last week, Governor Rick Scott declared a state of emergency in the districts of Martin and St. Lucie, and later they added Lee County and palm beach. Scott has accused the Federal government of neglecting to repair the aging dam lake, which threatens serious implications for the region. 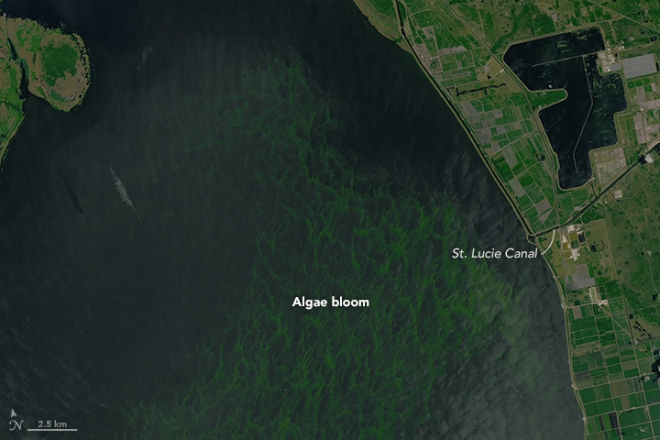 Aging levees, forcing the corps of engineers of the U.S. to controlled discharges of water through the channel to the East and West of the lake to protect nearby cities and southern sugar plantation from flooding. However, as a result of these discharges of the pollutant entering the lake from the North of agricultural land, spread along the rivers and lagoons and ended up in the ocean.

Local residents are concerned that in their districts there was an unpleasant smell of raw waste. There is concern that the cause blooms of cyanobacteria Microcystis, which can be toxic to humans and animals.

With the growth of public outrage, the army corps of engineers to reduce discharges of water from lake Okeechobee. But if the “greens” will continue to penetrate into southern regions need urgent resolution of the situation.