The Arctic began to burn in a new way. What does it mean 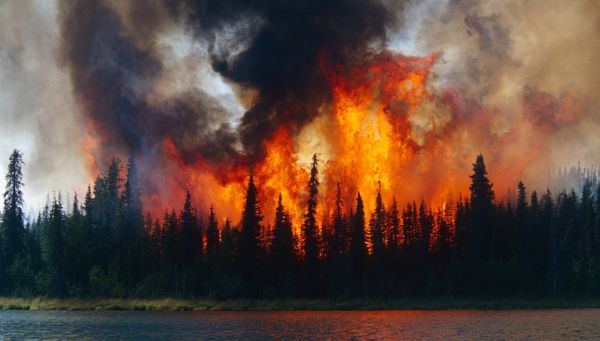 Zombie fires and the burning of fire-resistant vegetation have become new features of arctic fires with dire consequences for the global climate. An international group of scientists issued a corresponding warning in an article published in Nature Geoscience, writes Phys.org.

“It’s not just the number of burned areas that are alarming,” said study co-author Dr. Merritt Turetsky, an ecologist at the University of Colorado at Boulder. “There are other trends in satellite data that tell us how the fire regime in the Arctic is changing and what this means for our future climate.”

Scientists have identified two new features in recent arctic fires. First, it is the prevalence of slow-growing forest fires, also called “zombie fires”. Fire from a past bloom period can smolder underground in carbon-rich peat in winter, then re-ignite on the surface as soon as the weather turns warm in spring.

The second feature is fires in normally fire-resistant areas. As the tundra in the far north grows hotter and drier under the influence of warmer weather, types of vegetation that are not usually considered combustible begin to ignite: dwarf shrubs, sedges, grass, moss, even surface peat. Wet covers such as swamps become vulnerable to fires.

The team monitored fire activity in the Russian Arctic in real time using various satellite and remote sensing equipment. While wildfires on permafrost in Siberia south of the Arctic are not uncommon, the researchers found that 2019 and 2020 stood out for their extreme performance in satellite recordings.

At the same time, fires occurred mainly in the Arctic Circle, in a region that, as is known, does not suffer from large forest fires. The result, lead author Dr Jessica McCarthy of the University of Miami, explained that arctic fires flare up earlier and further north, in landscapes previously thought to be fire resistant.

What do we get with this?

The consequences of this new fire regime will affect the nature of the Arctic and the lives of local people, as well as the global climate. More than half of the fires detected in Siberia this year occurred north of the Arctic Circle in permafrost with a high proportion of ground ice. This type of permafrost holds huge amounts of carbon from ancient biomass.

Climate models do not account for the rapid thawing of these media and, as a consequence, the emissions of greenhouse gases, including methane. At a more local level, abrupt melting of ice-rich permafrost causes soil subsidence, flooding, and can flood large areas around lakes and wetlands.