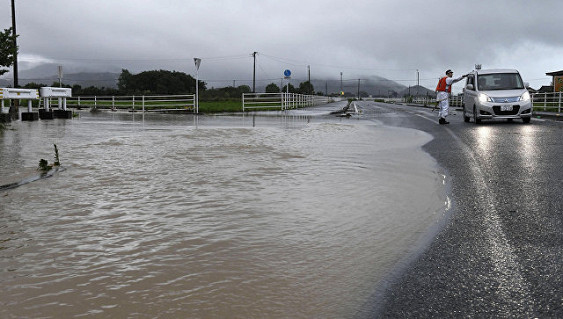 The torrential rains that hit the southern Japanese island of Kyushu are of the nature of a natural disaster, there are reports of missing persons, and 7,500 members of the self-defense and police forces have been thrown in the field, the Secretary General of the Japanese government Yoshihide said at an emergency press conference on Thursday morning Suga.

“There are reports of numerous floods of rivers and landslides in the prefectures of Fukuoka and Oita because of downpours.” River flow carried off the child, “” the river took a person, “” the house washed away water, I can not contact my parents “- such messages come from there 7,500 members of the self-defense, fire and police forces have been thrown in the air since morning, more than 40 helicopters are on standby to fly to the site, “Suga said.

According to the data for this hour, an order for urgent evacuation or a recommendation to evacuate was received by 556 thousand residents of both prefectures. There is information that the river carried off the railway bridge, thus interrupting the communication between the settlements. There is information about at least nine missing persons.