The Australian authorities declared war on the starfish 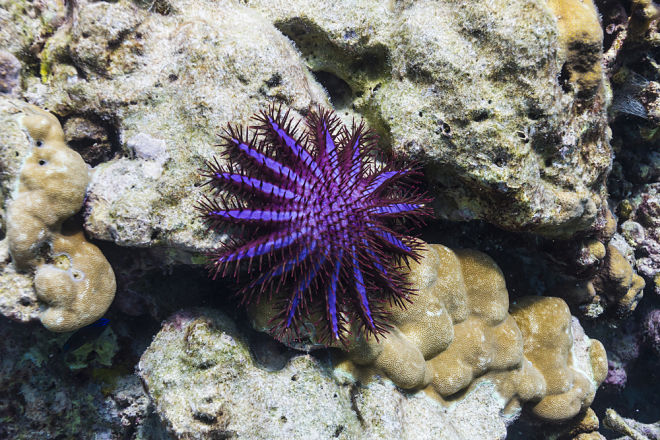 The Great Barrier Reef in Australia, a UNESCO World Heritage Site, eats a huge number of sea stars “crown of thorns.” The government of the country decided to start the destruction of marine animals.

A predatory starfish feeds on corals, covering them with its stomach and using digestive enzymes to turn the tissues into liquid. The trouble came when the reef is still in an unstable state after two years of severe discoloration.

“Each starfish eats a section roughly the size of its body, and therefore, over time, the area of ​​the reef becomes significant,” says Hugh Sweetman of the Australian Institute for Marine Research. “We’ll lose a lot of corals.” This will be a blow for both the ecosystem and the tourism industry.

A burst of mass breeding of thorns was observed last month in the Swain Reefs National Park on the southern edge of the Great Barrier Reef by researchers at the Marine Reef Park Administration.

Remote reefs 200 km from Jeppoon, a resort and fishing town 500 km north of the capital of Queensland, Brisbane, is the most visited part of the Great Barrier Reef. It is there that most of the efforts to destroy the starfish are concentrated.

Since the 1960s, there have been four major attacks of the Thorns on the Great Barrier Reef, but each time it was restored, as there were healthy populations of herbivorous fish. An increase in the population of sea stars usually follows the appearance of additional nutrients in the water, but the reason for the current increase in the number of predators is unclear. The reef is still recovering from the damage caused by the strongest coral bleaching ever recorded, which in 2016 killed two-thirds of the 700-kilometer strip of the reef.

The Great Barrier Reef, which covers 348,000 square kilometers, is listed as a UNESCO World Heritage Site as the longest and most spectacular coral reef ecosystem on the planet.