The Caldera long valley was rocked by a series of aftershocks

Over the past knocks in the heart of the Caldera, California long valley, a series of earthquakes that reached a magnitude of 3.4. The epicenters of the tremors were located at shallow depths of from 4 to 6.9 km at a distance of 23-25 km from the South-East of Mammoth lakes.

Caldera long valley is located in Eastern California and, according to experts from the U.S. Geological survey, is among the most dangerous of California’s volcanoes with high potential for eruption. Recent catastrophic activity occurred about 760 thousand years ago when, during a large explosion in the atmosphere were emitted 630 cubic km of tephra. 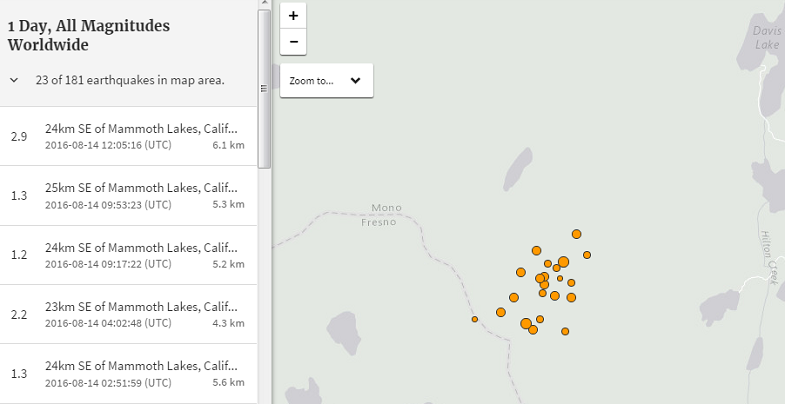 Since 1980, in long valley are periodically recorded increased seismicity related to movement of magma and growth of a resurgent dome. Usually, tremors are a single character and have a small magnitude.

A series of earthquakes on August 13-14 this year, not quite typical for background levels of the volcano. For comparison, in July 2016 in the Caldera was 8 earthquakes of magnitude above 1.0, June 18 the aftershocks, may – 18. As part of the August series of 23 events, the number of earthquakes with magnitude greater than 1.0 in one day was 22 and just one jolt had the power 0.9.