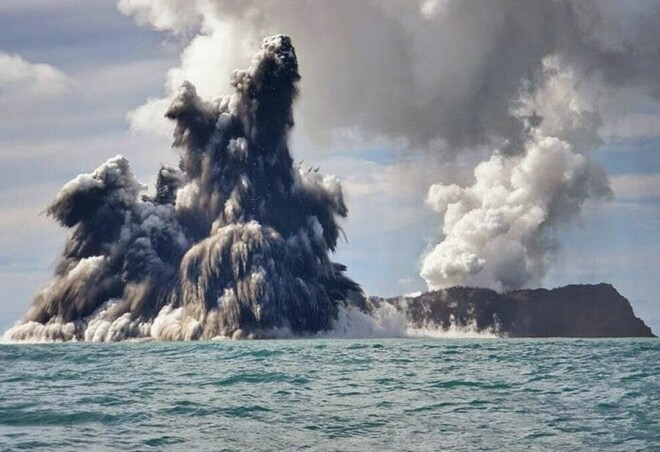 Scientists at Cardiff University in the UK have determined the exact mechanism behind the anomalous tsunami that spread around the world after a volcanic eruption in the Tonga archipelago in early 2022. The results of the study are published in the journal Nature.

The specialists analyzed satellite observation data that recorded the state of the atmosphere at the time of the volcanic explosion, as well as the results of measurements of sea level and atmospheric pressure. All the data was combined to create a numerical model showing how the atmospheric waves generated by the eruption affect the surface of the ocean. The simulated tsunamis were similar to those observed during the Hunga-Tonga-Hunga-Haapai eruption.

The cause of the catastrophic event was acoustic gravity waves (AGW), which arose during a powerful volcanic explosion and propagated at the boundary between the atmosphere and the ocean. When the waves converged with each other, a resonance arose, and their energy went into the formation of an unusually large and fast tsunami, capable of covering huge distances.

AGWs are low frequency acoustic waves that are affected by gravitational forces. The speed of propagation of such waves in the air is 340 meters per second, and in water – 1500 meters per second. Scientists have previously assumed that AGW, propagating along the surface of the ocean, can cause giant waves, known as volcano-meteorological tsunamis, but so far there have been no real observations of this mechanism. With the exception of the explosion of the Tonga volcano, all known volcanic eruptions that were accompanied by a tsunami occurred before the advent of modern instruments, so today the exact mechanism of the generation of volcano-meteorological waves remains poorly understood.

The eruption of the Hunga-Tonga-Hunga-Haapai volcano occurred on January 15, 2022 and became the most powerful volcanic event since the explosion of the Krakatoa volcano in 1883. The ash cloud was ejected to a height of 20 kilometers. The amount of energy released by the eruption was equivalent to 5–30 megatons of TNT. For comparison: the power of the atomic bomb dropped on the Japanese city of Hiroshima in August 1945 is estimated at 15 kilotons.