The crust in the ocean is breaking for no apparent reason 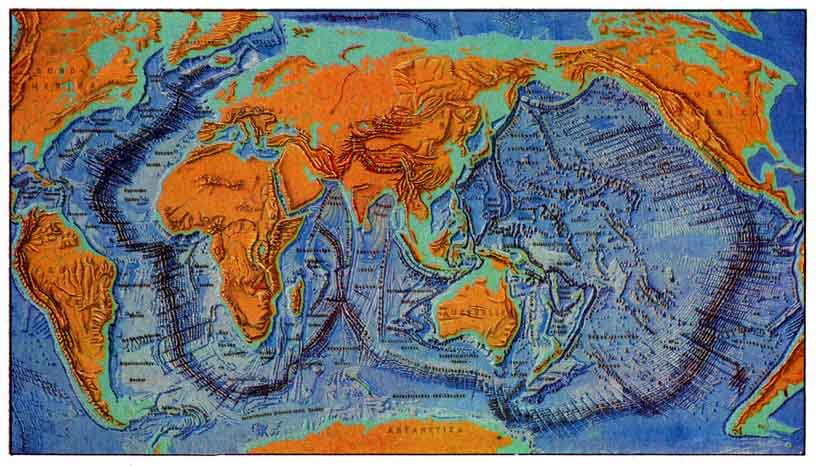 Submarine volcanoes and mid-ocean ridges are born during a very strange process – it turned out that the seabed can literally break itself, producing on the surface of lava flows.

Mid-ocean ridges was considered to be an analogue of the volcanoes on the surface of the ocean floor that work the same way as their land counterparts. We found that they should be seen as a kind of breaks in the crust through which lava seeps, said Yen Joe tan (Yen Joe Tan) of Columbia University in new York (USA).

Mid-ocean ridges form a huge mountain range at the bottom of the oceans, occurring at the points where the face or diverging tectonic plates of the earth’s crust. Under these ranges, as scientists believe today, there is a new crust and old crust is sinking into the depths of the bowels of the Earth. These underwater ridges are always surrounded by volcanoes and geysers, black smokers, whose emissions become a food source for many underwater organisms.

As tan says, until now, scientists believed that these ridges and volcanoes are formed the same way as their land counterparts – the emergence of a giant bubble of lava beneath the crust that rises to the surface and presses on the upper layers of the rocks. Over time, this hot matter makes its way out, and there’s a volcano or the outpouring of magma.

Tan and his colleagues found that in fact, under the water the appearance of new volcanoes and mountain ranges occur entirely different route, watching the birth of one of such structures in the Pacific, virtually on the equator, in 2005 and 2006.

To do this, scientists made a series of dives in one of the most volatile areas in the so-called East Pacific rise, a submarine ridge with a length of 8 thousand kilometers, and has established a set of seismometers and microphones. After some time there was a new eruption, the results of which literally made the authors of the article completely turn their ideas about Geology.

As it turned out, a new series of eruptions of volcanoes in this rift occurred not gradually, as predicted by the theory, and in fact simultaneously, where the Pacific ocean there was a huge line-crack in length of 35 kilometers, through which the lava rushed to the surface. This whole process was accompanied by big explosions, clapping and other loud sounds, which, as scientists believe, arose as a result of contact of water and lava.

Using the records of these sounds and data from the seismometers, the researchers found that their source regions were covered vegetative lava. Judging by the weak seismic tremors emanating from these points during the cataclysm, the earth’s crust has literally exploded into two halves literally by itself, without the assistance and pressure from the lava rising from the depths.

This is supported by the fact that the magma rose to the surface of the ocean floor evenly at the bottom of the fault, occurred four eruptions along fault lines, not one, as it happens in the case of a normal birth of a volcano on land.

Their eruption was very short – they lasted only two days, and during this time the Pacific ocean was covered with 22 million cubic meters of fresh rocks, which is equal to approximately 5% of all people living on Earth. This is a relatively small fault of such length that scientists are again attributed to the fact that it was generated not by the pressure of magma, and rupture of the cortex.

Why is the marine crust is broken by itself? Scientists do not yet know, however, they suggest that such gaps can be caused by the fact that tectonic stress in marine tectonic plates grows when they start to dive under the continental plate. The answer to this question will be found only when the geologists accumulated enough data on such gaps, the scientists conclude.