The death of the Dead sea 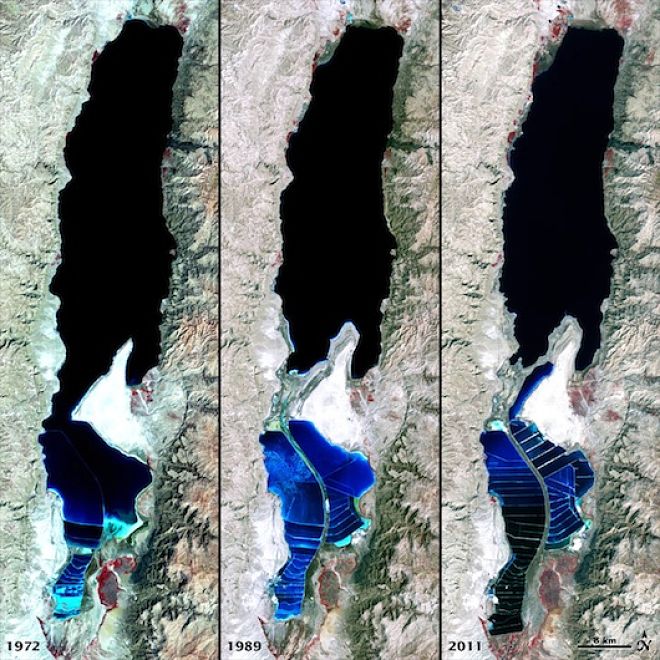 The dead sea got its name from the fact that it barely settle living organisms. And all because the lake is hypersaline, and a large part of the animal world would die in it (except for the recently discovered microbes at the bottom).

But as shown by satellite images, the Dead sea itself slowly dying for several decades. Three pictures in false colors was made in 1972, 1989 and 2011, and show changes in the Dead sea over 40 years.

This is not surprising, according to a study of the environmental group “Acopic Middle East”. The dead sea has lost over one third of its surface and declining at a rate of a meter per year.

The reduction is obvious in the photos. Made satellite “Landsat” images deep water is dark blue and shallow water is bright blue. Pink and brown — sparse vegetation, red — rich. Near the center is the Lisan Peninsula.
Why is the Dead sea becoming smaller and smaller? Mainly because of the diversion of water from the river Jordan, but intensive mining of salt also guilty.

In 2015, Jordan and Israel have developed a project budget of $900 million, which will help to save the Dead sea. The plan includes the construction of a desalination plant and a pipeline linking the Red sea with the Dead. Desalinated water from the red sea “water” both of the state and will supply 300 million cubic meters annually in the Dead sea.