The earthquake in New Zealand has bared an ocean bottom 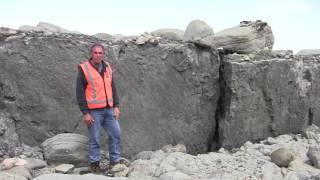 The earthquake in New Zealand has bared an ocean floor. The land area which was covered quite recently by water meters is covered with the decaying seaweed, dead fishes and crabs.

Has begun to shake New Zealand on November 13. Seismic activity didn’t cease days and has affected the huge territory. Epicenter of an earthquake was to the northeast of the city of Christchurch. The strongest tremor measuring 7,8 has struck in 180 km from the city of Kaikoura on November 14.

The seismic wave was so strong that tectonic plates have started moving. Because of raising of an earth’s plate the coastline near Kaikoura has increased by 2 meters, and in places — by 5 meters.

Though the earthquake was stronger than a notorious seismoevent of 2011, the scale of human losses quite moderate. Two persons have died, several dozens of locals were traumatized. For comparison — in 2011 because of tremors 185 New Zealanders have died.