The eruption continues: more than 1.5 km of new land has been formed in Hawaii 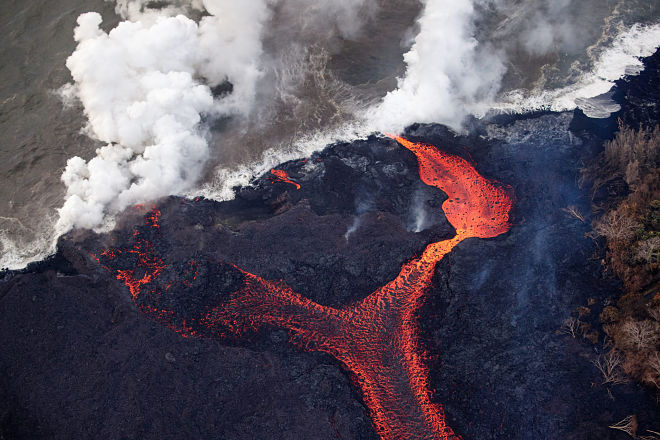 As a result of the eruption of the Kilauea volcano, 1.6 km of land was formed. The lava of the Hawaiian volcano reached Capojo Bay, according to the US Geological Survey, while evaporation of the largest freshwater lake in Hawaii. Its depth in some parts reached tens of meters.

Formed by lava new land in the bay in the coming years will not be suitable for farming. However, due to humidity and other climatic conditions, soon there will appear on it plants – in the first place, ferns. Lava continues to fill the Bay of Kapokho, a new land has already been declared part of the state.

The eruption of Kilauea on the Big Island has been going on for more than a month, experts can not say when it will stop. According to the Mayor of Hawaii District, Harry Kim, as a result of the movement of lava flows, more than 600 houses were destroyed, and the tourist infrastructure on the Big Island (Hawaii Island) was also completely destroyed.

The lava has passed more than 2000 hectares, thus in some places the layer thickness reaches 6 meters. Earlier, the evacuation was voluntary, but on June 1, the authorities made it mandatory for residents of some areas. President of the United States Donald Trump declared Hawaii a zone of natural disaster.