The eruption of the Fuego volcano 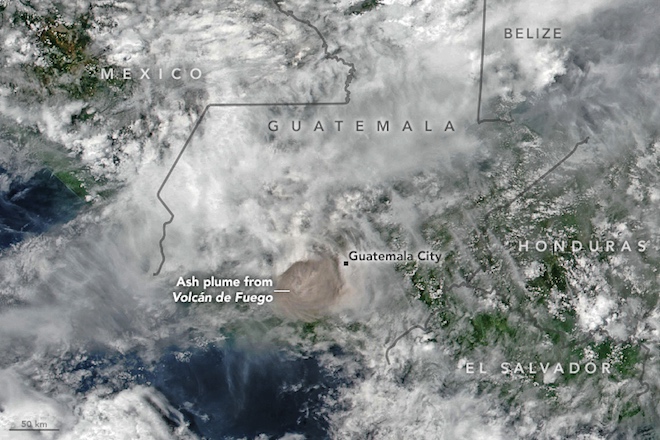 The Fuego volcano in Guatemala is one of the most active volcanoes in Central America. Over the years, the towering Fuego has continuously fumed, occasional episodes of explosive activity have occurred, leading to the formation of ash plumes, lava flows and pyroclastic flows. 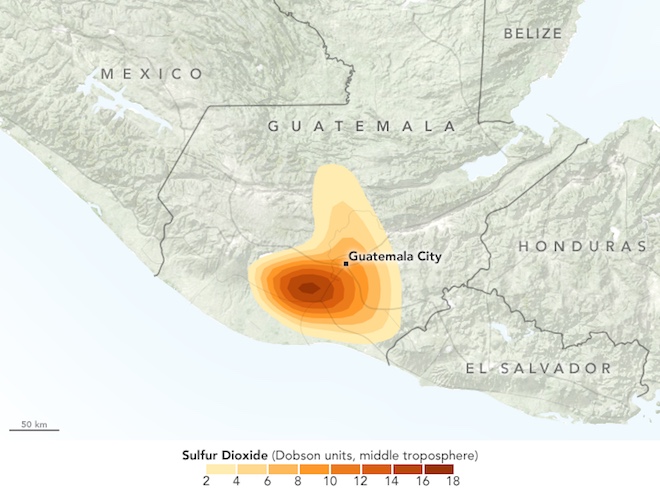 Shortly before noon on June 3, 2018, an eruption occurred, the ashes from which rose several thousand meters into the air. A deadly mixture of ash, debris of rocks and hot gases poured over ravines and channels of the volcano’s slope. Since these pyroclastic flows often travel at a speed of more than 80 kilometers per hour, they easily overturn trees, houses or any other objects on their way. According to media reports, more than two dozen people died. As a precautionary measure, several thousand people were evacuated.

The VIIRS radiometer on the meteorological satellite Suomi NPP received this snapshot of the ash plume at 13:00 local time on June 3, 2018, after the ashes (indicated in brown) rose above the clouds. In the report of the Volcanic Ash Advisory Center in Washington, the maximum ash release height was estimated at 15 km. The image from the geostationary satellite showed that the wind is blowing to the east. Ashes from the eruption reached several localities surrounding the volcano, including the city of Guatemala (the capital of Guatemala), which is 70 kilometers to the east.

In addition to ash, the loop contains gaseous components invisible to the human eye, including sulfur dioxide (SO2). Gas can have an effect on human health – it irritates the nose and throat when inhaled, and can also react with water vapor, which will cause acid rain. Sulfur dioxide can lead to the formation of aerosols that promote fog formation and climate cooling.

AIRS instruments on the satellite Aqua and OMPS on the Suomi NPP satellite often conduct observations of sulfur dioxide. The map above shows the concentration of sulfur dioxide in the middle layer of the troposphere at an altitude of 8 kilometers, recorded by OMPS on June 3. Seeing the SO2 content in the upper layer of the troposphere collected by AIRS a few hours after the eruption, volcanologist Simon Karn of the University of Michigan stated that this is the highest concentration of sulfur dioxide caused by the eruption of Fuego, which was recorded by satellites.