The eruption of the Kilauea volcano in Hawaii 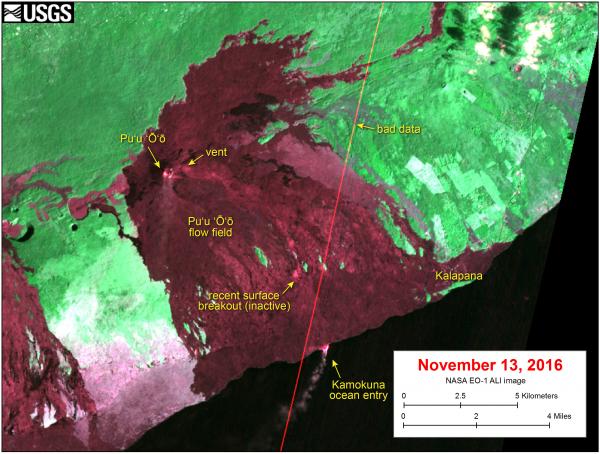 The eruption the cone of Puu OO Kilauea volcano, the most active in Hawaii, continues almost without interruption for more than three decades. The location and intensity of the lava flows vary from year to year. Eruptions differ — sometimes glowing lava flows crawling on the ground, and sometimes hiding under the surface in lava tubes.

And when the lava flow comes into contact with the ocean, starts a spectacular show — the creation of the island. But the lava meets the sea every day. In previous times the flow from Kilauea flow into the Pacific ocean in 2013.

The latter with the sea touched the flow 61G, which began to pour out of Kilauea in may 2016. 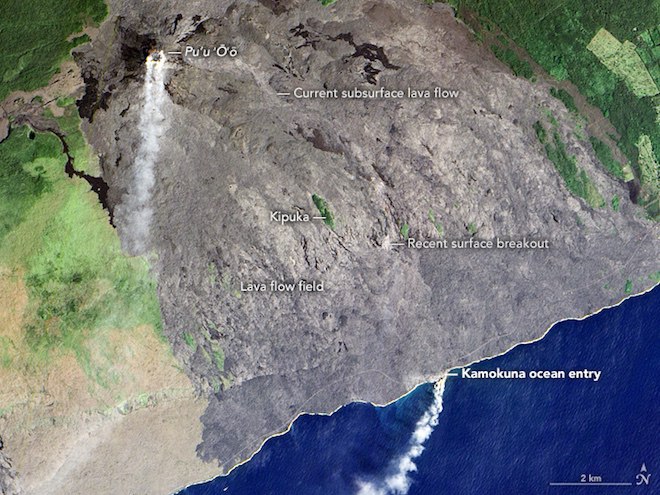 The satellite Earth Observing-1 captured the natural phenomenon in natural color 13 Nov 2016. Gray areas on the image for full field flow, including lava, which had accumulated here since 1983. Active thread in the pictures starts in the crater East of crater Puu OO. Ground-based research suggests that it is moving to the Southeast and South through a lava tube beneath the surface. Active thread is hidden from human eyes, but from time to time bursts to the surface. A sign of such a breakthrough — light-gray area at the base of the cliff.

The meeting of lava and sea attracts many tourists. Hawaii volcanoes national Park warns visitors about the danger: “the Approach to the place of contact of the lava flow and sea water exposes you to danger. Educated the soil is unstable, as it stands on solidified fragments of lava and sand. This is quicker than the material can easily blur the wave, leaving a new land without the support and forcing her to slip off into the sea. In the end, during the interaction of lava with the ocean creates acid stream, filled with fine volcanic particles that can irritate the skin, eyes and lungs.”