The eruption of the Klyuchevskaya volcano in Kamchatka 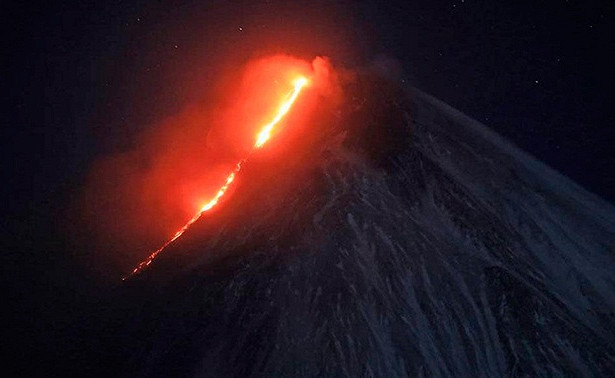 In Kamchatka, the activity of Klyuchevskoy volcano has sharply increased. The length of the lava flow descending along its slope has grown to almost one kilometer, according to the press service of the Institute of Volcanology and Seismology of the Far East Branch of the Russian Academy of Sciences.

“In the crater, ejections of incandescent material appeared at a height of about 100 meters above the rim. A powerful glow is observed over the lava, and volcanic tremors have also increased.”

The source of the lava flow is in the area of ​​the bocca, which was formed as a result of a previous eruption. The stream flows down the slope into the Apakhonchi trench.
“Ash clouds, ash falls, lava and mud flows are dangerous during volcanic eruptions. There is a real threat to the Klyuchi village and its communications.

There is a high danger for airlines passing in the Kamchatka region. Ash falls are possible in the villages of Klyuchi, Kozyrevsk, Ust-Kamchatsk, Milkov, the city of Petropavlovsk-Kamchatsky.

The volcanic eruption resumed after a two-month hiatus in early October.