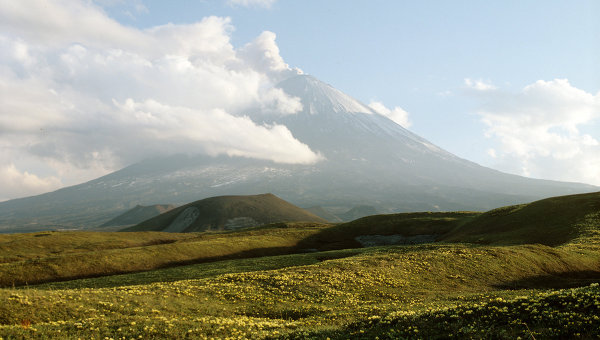 The configuration of the Eastern slope of the volcano Klyuchevskaya Sopka is undergoing changes as a result of explosion in the side crater, was reported in the Directorate of natural Park “Volcanoes of Kamchatka”.
“The explosion occurred at a height of about 4.5 thousand meters. The result was torn the side of the crater, crater with a diameter of approximately 500×500 meters. On the Eastern slope of the volcano there is a powerful gush of lava, lava flows descend to a height of 2.5 thousand meters”, — stated in the message.
Also shows the activity on Central crater – there are emissions of volcanic bombs to a height of 600 metres. In addition, the crater has grown cinder cone, causing the volcano Kliuchevskoi was slightly higher.
“The eruption that began in April 2016, has been stable, but ordinary. Now, however, there is a change in the configuration sector of the Eastern slope of the volcano, a phenomenon experts recognize a unique” — added in the natural Park.
The highest active volcano of Eurasia – Klyuchevskoy volcano began erupting on April 3. On satellite images over the volcano was continuously recorded thermal anomaly increased combined-cycle activity. Giant threw ash plumes to a height of 8 thousand meters above sea level.
“At the moment, the activity of Klyuchevskaya increases. The eruption can last from a few months to a year. Vulcan assigned “orange” aviation code of the danger,” — said in the natural Park.
The Klyuchevskaya Sopka volcano is Klyuchevskaya group of volcanoes, at a distance of 60 kilometers from the Bering sea. Its height is approximately 4.85 thousand meters. The nearest town — settlement Keys is located at about 45 kilometers from the volcano. The previous eruption of the Klyuchevsky was observed from January to March 2015 and lasted about 3 months.