The explosion of the volcano caused a great flood on Crete 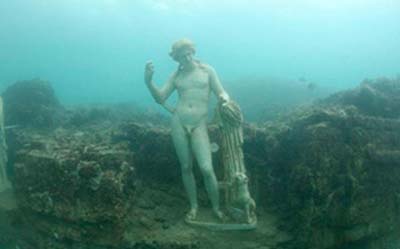 The reason for the mysterious destruction of the Minoan civilization on the island of Crete could serve as a giant tsunami caused by the outpouring of gigantic quantities of magma in the Aegean sea in the explosion of the volcano on the neighboring island of Santorini.

Before the eruption of the SUPERVOLCANO modern archipelago of Santorini was a single island. In 1628 BC catastrophic eruption destroyed the middle of the island, and left in its place a recess with a volume of 133 cubic kilometers, which was swallowed by the sea. The destruction of the island caused a tsunami, the bombing of the surrounding areas with debris and volcanic ash, which caused a fatal blow to the Cretan-Minoan civilization.

Timothy Druitt from the University of Clermont in Clermont-Ferrand (France) and his colleagues for several years studying the traces of these eruptions, trying to figure out how quickly it happened, what consequences it brings and how you can protect yourself or predict such disasters.

Four years ago, they found that the eruption occurred almost instantaneously in geological terms – for only 100 years, the magma chamber underneath the island was filled with fresh molten rocks that are warmed up local stocks of magma, forced her to expand and to literally tear the island apart.

In his new work, the Druitt team studied what happened directly after the eruption, studying the composition of rocks in the sea at the site of the former crater of the volcano, and making topographical maps of the surrounding area in the bottom with scuba divers and submersibles.

Unusual channel in the North-Western part of the archipelago, which scientists have discovered underwater, told them about what happened with the island and the surrounding ocean during the eruption and in the first days after the disaster. 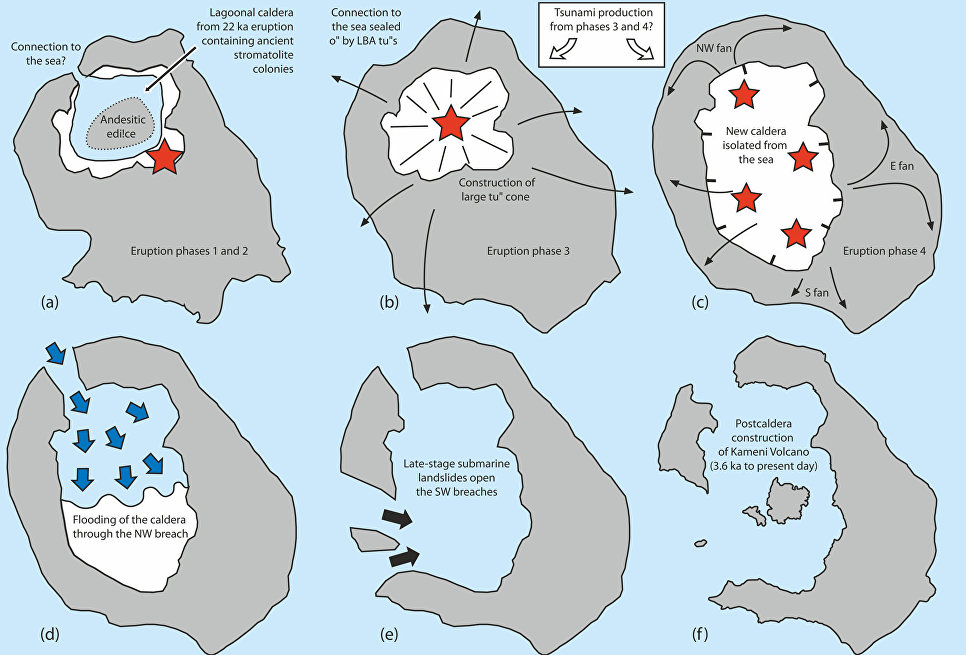 For example, unusually deep wall of this channel and its structure indicated that the walls of a volcano on the island of Santorini collapsed before it exploded inside the crater burst in sea water. This means that tsunami, which was allegedly caused by the destruction of the island and the fall of the debris in the Aegean sea, was born a completely different way.

The fact that the tsunami did exist, scientists are not in doubt about his appearance clearly show traces of sea water and sand in Minoan Crete, where she could get only in case, if the height of the waves near the shore exceeds ten meters. Accordingly, Druitt and his colleagues had to find a different explanation for how came this great flood.

Traces of this event, scientists have found in the centre of the former crater of the volcano, and a few hundred metres from the shores of the archipelago.

As shown by the analysis of rocks in the Central part of the former island, in the early stages of the eruption part of Santorini exploded due to the fact that in the Central part of the island was a lagoon with sea water, which became the first victim of hot magma rising from the bowels of the Earth. This explosion has led to the fact that the southern part of the former island was literally instantly flooded with the most powerful outpourings of magma, whose volume exceeded 16 cubic kilometers.

They eventually slipped in the Aegean sea, covering the bottom of the southern coast of Santorini 60-meter layer of new breeds, and caused a powerful tsunami wave height which is the former island exceed 35 meters, down to about ten meters when they reached the shores of Crete.

Almost immediately after that the walls of the volcano collapsed, then the sea broke through the dike of volcanic ash, formed from the North-East of the modern canal at the bottom of the sea. His water began to fill the newly created basin completely filled with water in just 40 minutes, if the channel depth was the same as it is today. So rapid over such geological disasters, as the researchers note, suggests that volcanoes, especially island species should be given special attention.