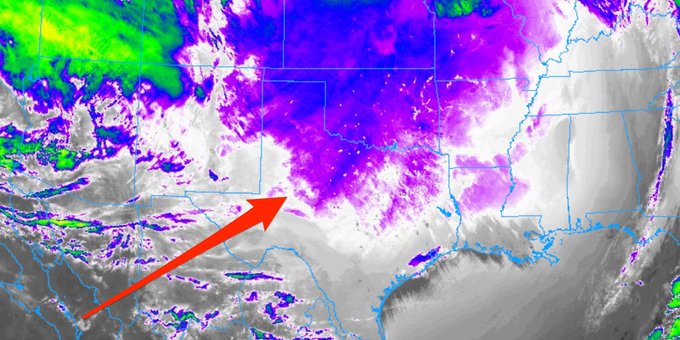 A violent winter storm in the southern United States caused such extreme cold that it confused the weather satellites tracking the situation.

On Tuesday, cold air approaching south of the Arctic froze the earth so much that one monitoring satellite mistook the earth for cloud tops, which are usually much colder than surface temperatures. This phenomenon was first pointed out by Washington Post meteorologist Matthew Capucci.

A similar effect was seen on February 10 in Canada, where it was featured on the local news channel WROC TV in Rochester, New York.

The satellite in question, called GOES-East, uses infrared sensors to measure temperatures at the top of the clouds and plot them. Clouds are usually colder than the surface of the earth. The satellite’s algorithms use this assumption to determine cloud cover from space even at night.

The satellite’s algorithm then got confused and mistook the temperature of the earth for clouds, marking them with blue and magenta, the colors usually reserved for clouds.

A surge in electricity demand in Texas led to power outages, leaving more than 2.8 million people without electricity on Monday.

President Joe Biden declared a state of emergency in Texas on Sunday.

An energy emergency was declared and 14 US states faced severe power outages.

At least 30 deaths are associated with a cold snap.