The fires in the Israeli Haifa on a photo from space 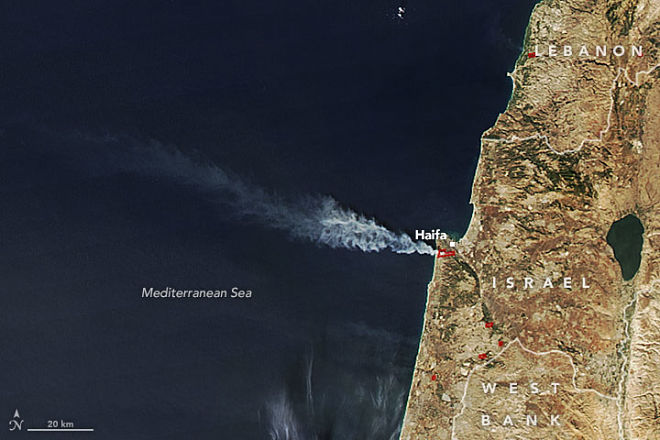 In November, 2016 50 thousand people from six areas have been forced to flee the Israeli Haifa because of the strongest natural fires. For several days fire has destroyed 77 buildings and left more than 1,6 thousand people without roof over the head.

On November 24, 2016 спектрорадиометр MODIS onboard the Terra satellite has taken the picture in which east winds carry smoke over the Mediterranean Sea. The red contour has allocated hot spots where the sensor has revealed extraordinary high temperature of a surface — a fire burning sign. The Israeli authorities consider that many ignitions have broken out because of deliberate arsons though the fault lies also with a two-month drought in the region.

Messages on the serious problems with health which have arisen at residents of Haifa in connection with the fire didn’t arrive. Several people have been hospitalized because of poisoning with smoke.