The flood in Primorye, Russia 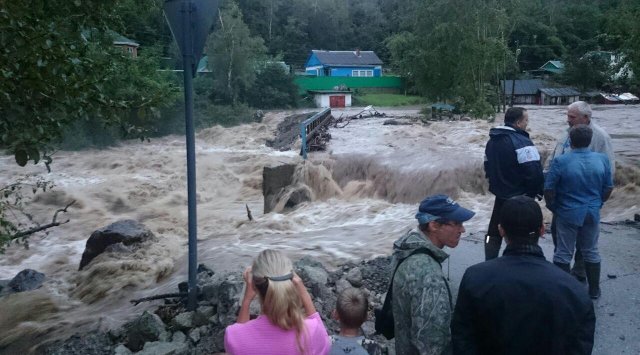 Marines of the Pacific fleet do not leave the flooded areas of Primorye. The convoy of the Eastern military district went to the next flight. Soon the lorries will take the flood-affected people of the new batch of humanitarian aid.

A convoy of seven cars will travel over 500 miles across the flood zone. The Marines will make stops at three localities. They will bring residents food, medicine, daily necessities, tools, and heat guns, generators and pumps.

Grouping of the Ministry of defence, which has suffered from Typhoon Lionrock region employs 3.5 thousand servicemen, 400 units of special equipment and 18 aircraft and helicopters.

In the flood-affected districts of the Primorsky territory remain. Assistance in the flood zone and often required, and animals. In one of the farms cut off from land was deer.

To reach red deer, were the only rescuers of the Kamchatka division of the Ministry of emergency situations. They brought pet food and decided to rebuild the destroyed bridges in the area of the farm.

Only in the aftermath of the Typhoon in Primorye Lionrock involved more than 100 rescuers from Kamchatka. They deliver humanitarian aid, help the elderly to harvest and transport their children to school. Emergency crews MES pumped water from flooded homes and dry the premises, and on duty on the dangerous roads and crossings.

As the Director of the farm Alexander Arnaut, the decision to appeal for help to rescuers it was made after as a result of a powerful Typhoon and cyclone in the vicinity of the farm had been washed away roads and bridges. Access to animals across a swollen river has become dangerous to life.

Kamchatka rescuers willingly responded to the call for help.

Bringing food to the farm, the employees EMERCOM of Russia assessed the situation in the first place helped to feed the frightened animals. At first, the deer approached new people with caution, however, after some time, were willing to accept refreshments from them, and some allowed themselves to be petted.

Once all the animals were fed, rescuers began to rebuild bridges in the vicinity of farms. One of the bridges can not be restored, so it was decided to build a new.

Kamchatka rescuers and state inspectors for small vessels divided into three groups. They have delivered humanitarian goods to cars, boats and by aircraft, provide targeted assistance to the population, ensure safety on the destroyed bridges and restore the crossing.

They also help to lonely pensioners and invalids on the harvest from their household plots, harvested firewood. Deliver students to school, pumped water from the basements in those localities where the water level has dropped considerably, and also dry space with heat guns.