The flood in Yakutia 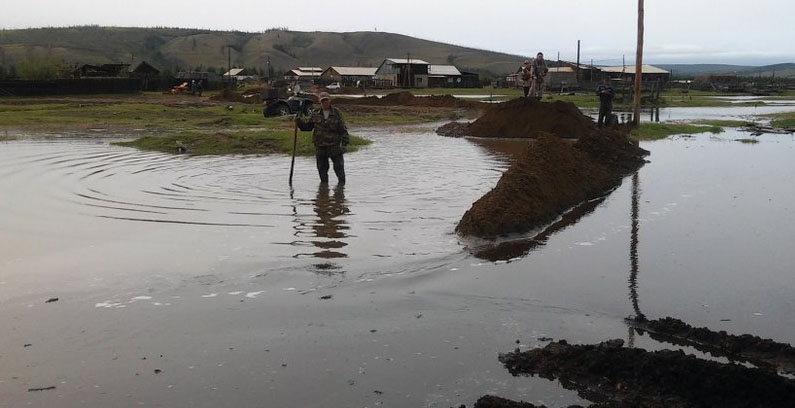 Due to heavy rains in the Verkhoyansk area of Yakutia recorded high water levels in the rivers Yana, Dalalah and Sartang. From the 27th of July in the city of Verkhoyansk there is a regime of emergency.

By Wednesday evening there were recorded the water level 1004 cm in critical 1020. 47 flooded courtyards and private yards, said the head of the city Yevgeny Potapov.The situation began to deteriorate from July 26, the water began to arrive due to the rise of river levels Dalalah and Sartang. The day before here was put on high alert. But when water levels become even higher, it was decided to introduce a regime of emergency.

Urgently mobilized several teams for the construction of a dam on the outskirts of the city.About 150 people within a few hours had built a protective dike, with a length of 160 meters. This, according to the mayor, saved us from flooding of the Central part of Verkhoyansk. “The geographical location of the city is very dangerous. Verkhoyansk is located between the mouth of the Yana and the lake. With significantly increasing water city can be completely flooded with water. That is why the construction of the dam was so important,” says Evgeny Potapov.

Currently, the city created the necessary supplies of food and water. In high school, deployed the evacuation point. According to the head of the district Viktor Potapov, a more complicated situation is in the village of Saida in 200 km from the district center. Here, the water from the river Yana completely damaged runway, 5 houses and 4 km of local roads.

Chapter Aginskogo naslega Victor Burtsev said that currently, there is a possibility of flooding of the whole village, as water levels continue to arrive. “Now nasleg completely cut off from the outside world. Critical point already passed,” says the head. In the village the second week there is a regime of high alert.