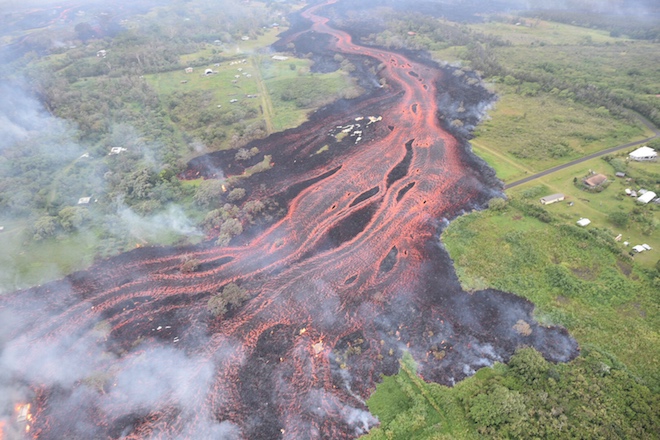 A rapid lava flow crossed the road and isolated 40 houses on Friday in a rural area near the Kilauea volcano. Four people were evacuated by helicopters.

Experts do not know exactly when the volcano will calm down. The volcano on the Big Island survived the explosive eruption on its summit on Thursday, throwing ash and stones thousands of meters into the air. No one was hurt, no damage was done to the property.

Almost at midnight on Saturday, the volcano shot a stream of ash, after which a cloud of ash rose to the sky. According to the Hawaiian Volcanic Observatory, the ash cloud reached an altitude of 3000 meters.

Scientists say that the eruption on Thursday was the most powerful in recent days, although it lasted only a few minutes. It happened two weeks after the volcano began to jet lava flows 40 km east of the summit.

On Friday, in the vicinity of Kilauea, a new lava crack opened – the twenty-second in a row. Several open cracks still throw out streams and spray of lava in evacuated areas. From them also comes gas, enveloping houses and trees.

Fresh and hot magma creates fast lava flows that can cover a large area. Most of the ejected lava could be buried underground for decades, probably from the 1955 eruption. New explosive eruptions on the summit of Kilauea are not ruled out.

The authorities measure the level of gases, including sulfur oxide, which is lifted by small clubs from open cracks. Most of the Big Island and the rest of the islands of the archipelago did not affect the volcanic activity of Kilauea.