The frequency of earthquakes has sharply increased in the world 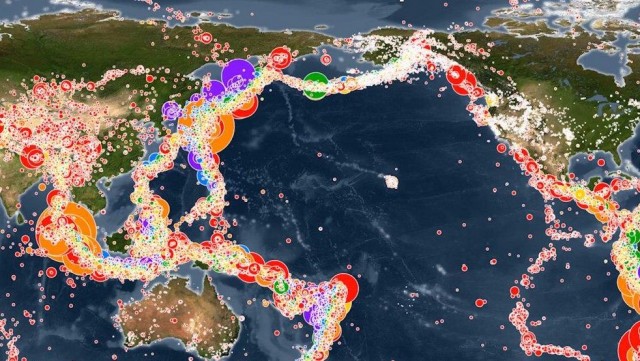 The world seems to have entered a period when the seismic situation is becoming more unstable and earthquakes are occurring more often.

Over the past 10 days, there have been more than 140 major earthquakes in the world. Only on Sunday there were more than 50, writes Michael Snyder in the blog The American Dream. And these were not weak earthquakes. The US Geological Survey considers earthquakes of magnitude at least 4.5 “significant.”

A strong earthquake of magnitude 7.3 occurred near the northern coast of Venezuela on Tuesday and damaged buildings in Caracas, the capital of the country, Reuters reported citing the US Geological Survey.

The epicenter of the earthquake was not far from the city of Karupano, a district of poor fishing communities. Subterranean tremors were felt in neighboring Colombia and nearby island states, such as Trinidad and Tobago and Saint Lucia.

On Sunday, the US Geological Survey recorded a massive earthquake with a magnitude of 8.2 in the Pacific Ocean near the islands of Fiji.

In just 48 hours, on Sunday and Monday, there were 69 major earthquakes in the “ring of fire” – an area along the perimeter of the Pacific Ocean, where most of the active volcanoes are located and the overwhelming majority of earthquakes that shake our planet.

16 “significant” shocks of magnitude 4.5 or more shook the “ring of fire” on Monday after 53 earthquakes on Sunday, writes the Daily Mail.

Underground shocks raised fears that a devastating earthquake with magnitude 8 or more could occur in the California area, the newspaper notes.

Scientists have previously warned that seismic activity in the “ring of fire” can cause a domino effect, provoking earthquakes and volcanic eruptions in other parts of the region.

The increase in the frequency and intensity of earthquakes is observed throughout the planet.

On the night of August 15 to August 16 and the morning of August 17, there were several earthquakes in the Molise region in Italy. The fluctuations were also felt in the Marche region near the port city of Ancona.

An earthquake of magnitude 5.2 occurred 4 km from the south-eastern city of Montechelfone in the Molise region on the night of August 16, the National Institute of Geophysics and Volcanology of Italy (INGV) reported.

As reported, “Vesti.Ekonomika, earlier in August on the Indonesian island of Lombok earthquake of magnitude 6.6 points, which killed nearly 100 people. Several thousand houses were damaged. Authorities conducted a mass evacuation.

In addition to unusually frequent earthquakes, dozens of volcanoes are now erupting around the world.