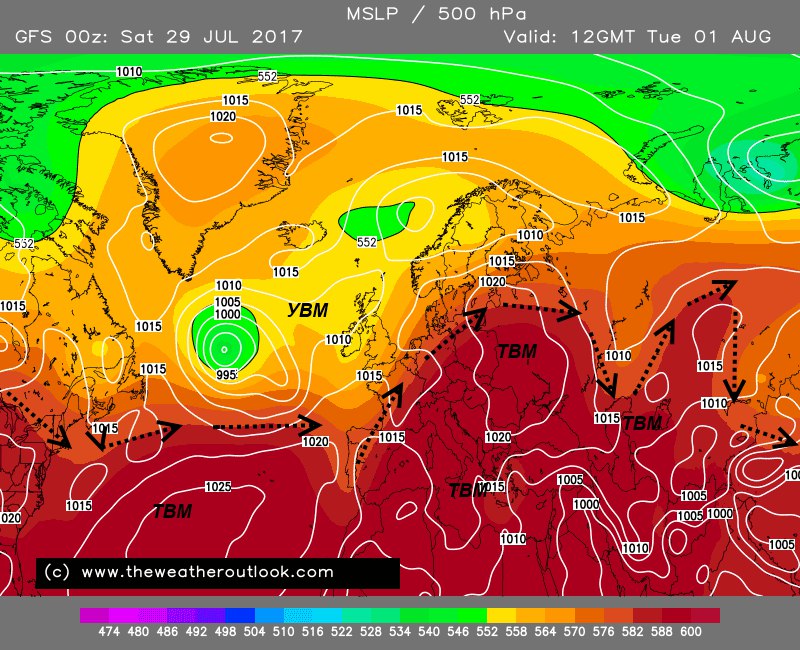 Starting July 30, 2017 and for an indefinite period of time, in connection with the establishment of blocking cyclones near the UK and the Scandinavian Peninsula, it is expected to carry out a very hot tropical air mass from the north of Africa. Anomalous heat and drought are expected in a number of countries in Southern, Central and South-Eastern Europe.

The map shows the temporary “occupation” of Africa by European countries. Colors on the card are characterized by decameters (de – prefix 10). If the color is green, then the altitude with atmospheric pressure of 500 hPa (average troposphere) is below the average value, and if red, then the height with the same atmospheric pressure is above the average value. Green areas are characteristic of cold cyclones, and red ones are for warm anticyclones or low pressure zones of tropical and equatorial latitudes.

As a rule, an anticyclone with such indicators, at ground level, is manifested by anomalous heat and drought. In addition, the very presence of a warm anticyclone at heights of 500 hPa indicates the probability of blocking the leading flow and, as a consequence, the disturbance of the normal western air mass transfer (DWM) and drought.

The NAO index or the index showing the intensity of the WVDC will go into a deep minus, which would mean a significant weakening of the western air mass transfer. The map clearly shows that the red color of the warm and high middle troposphere, characteristic of Africa, took up most of Europe. According to preliminary information, the heat will continue until the end of the first decade of August.