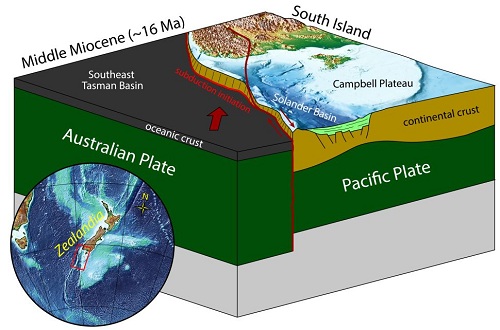 South of New Zealand in the Tasman Sea is a stretch of stormy ocean where waves regularly surge 6 meters or more and winds blow at 48 kilometers per hour on a good day. Deep beneath these rough seas on Earth is also turbulent.

In this region is the Puisegur Trench, site of one of the youngest subduction zones on the planet. Here, the Australian plate pushes up under the Pacific plate, causing frequent strong earthquakes, including a magnitude 7.2 earthquake in 2004.

Now a new study shows how this young subduction zone arose: Over millions of years, part of the “hidden” continent of Zealand at the boundary between the Australian and Pacific plates has stretched and shifted so that denser oceanic crust has crashed into it — and ended up underneath it.

This finding that placing different types of crust against each other at an already existing plate boundary leads to subduction may help explain how other new subduction zones are forming around the world.

“Subduction zones are one of the most important, if not the most important, plate boundaries,” said lead study author Brandon Schuck, a doctoral student at the University of Texas at Austin. “They are really the main drivers of plate tectonics, so they are the main cause of plate movement on Earth. They are also very destructive plate boundaries. …We don’t understand very well how they originate and how they form in the first place.”

The formation of subduction zones is mysterious because subduction zones are inherently destructive. When the oceanic crust plate sinks beneath the continental crust, the rocks at the surface twist, break, and deform. Meanwhile, the oceanic plate sinks into the mantle, where it melts beyond recognition. This leaves little geologic history to study.

The subduction zone on the edge of Puisegur is young enough that this history has not yet been erased. This makes it an ideal place to answer the question of how subduction zones form in the first place. So far, there is no good explanation of how tectonic plates rupture and start subduction.

Studying the Puisegur margin is no easy task because it is located in the Roaring Forties, a latitude between 40 and 50 degrees south where brutal winds and currents blow. Scientists aboard the research vessel Marcus Langseth traveled to the region in 2018 as part of an experiment to study subduction on the South Island. It was a challenging trip, Schuck says. The crew had to spend nearly a quarter of the time sheltering behind islands to avoid a storm.

“At one point our boat was tossing from side to side 20 degrees,” Schuck said. “It was a real mess.”

Despite the weather, the researchers were able to set up seismometers on the seafloor and conduct a subsurface seismic survey, a method that uses reflected sound waves to see underground structures.

How did the subduction zone form?

The new data allowed researchers to put together a history of the young subduction zone, which Schuck presented April 22 at a virtual meeting of the Seismological Society of America.

It all started about 45 million years ago, when a new boundary between the Australian and Pacific plates began to form under a force called stretching – tectonic forces pushed the two plates apart.

The oceanic crust at the plate boundary reacted predictably to this expansion: As the crust thinned, magma from the mantle seeped upward through cracks, solidifying into new rock. This process is called seafloor spreading, and it is how new oceanic crust is formed.

Likely little of interest would have happened, if not for another tectonic shift 25 million years ago.

This was the key to starting subduction, Shuck said: Continental crust is more buoyant than denser oceanic crust, and this difference in buoyancy allowed the denser part of the Australian plate to slide under the lighter Pacific one, especially because the boundary between these continental and oceanic plates was already weakened by the earlier strike-slip faulting. The findings drive home how important strike-slip movement is to tectonics, Shuck said.

“How plates rotate is really important,” he said. “If you just think about pulling things apart and pushing them together you don’t really create that much contrast, but [with] strike-slip, you’re translating [sliding a portion of crust] and it’s super-efficient. Just imagine, with the plates sliding past each other, you’re going to cause materials of different properties to come together eventually.”

What about other subduction faults?

There are other spots around the globe where strike-slip movement is happening in the same place as the compression and convergence of plates, particularly along the Queen Charlotte fault north of Vancouver and south of Alaska, Shuck said. That fault may be a place where a subduction zone could potentially form, he said.

Will the fault at Macquarie Ridge begin to turn into a subduction zone, too?

The Puysegur margin and Macquarie Ridge are related and are experiencing similar changes in plate motion over time, though Puysegur is further along in the process.

Macquarie Ridge, being two slabs of oceanic crust coming together, might be more resistant to subduction than the continental crust and oceanic crust boundary at Puysegur. But subduction zones can also spread along a fault from a single point. Those two segments could actually link up — maybe — in the future.

Meanwhile, scientists are looking to learn more about the mysterious seabeds across Earth’s five oceans… Maybe these new maps will help them find new dangerous subduction zones at the bottom of our seas…