The hurricane tore roofs from 150 houses in the Amur region 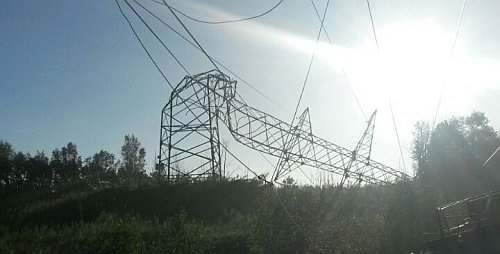 The roofs of 150 houses and two schools in four localities of the Amur region disrupted by strong wind gusts and heavy rain led to flooding of about fifty the grounds, the press service of the far Eastern regional center of EMERCOM of Russia on Sunday.

During the passage of the cyclone by strong gusts up to 18 m/s according to the revised data has been damage to roofs of 147 houses, mostly private, and two secondary schools in the villages of Voskresenovka and. on the territory of Bureya, Michael, Arkhara the area. Only the General result of damaged 3610 sq m of roofing, – stated in the message.

As the press service of the regional EMERCOM of Russia, on the eve of the Arkharinsky district of the strong wind in gusts up to 19 m/s blew off the roof 104 private houses in the villages Domican, New Domican and Novospassk, and damaged the roof of the school in Novospassk.

In the village of rodionovka Bureya district wind damaged the roof 43 private homes, and damaged an electricity pylon. As a result of disrupted power supply in 88 residential buildings, fallen trees. Bureyskaya territorial subsystem RSChS transferred to the emergency mode. Restoration work deals with airmobile group of the Russian emergencies Ministry and the crew of the Amur branch of far-Eastern distribution company.

In Seryshevo district, where a state of emergency, due to flooding of private houses in makounta village seryshevo is 47 people, 16 of them children from the villages of Derjavini, Avtonomova and Verhneportovaya.

In Voskresenivka Mikhailovsky district strong wind gusts up to 18 m/s were ripped off the roof on one apartment building and the gym of the village school.

Just carrying out abnormally-recovery work on elimination of consequences of a cyclone on the territory of the Amur region involved 242 people and 64 pieces of equipment.