The lake in the Vladimir region of Russia suddenly went underground 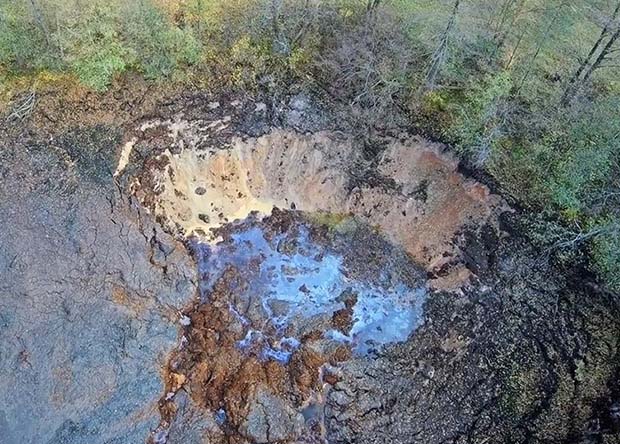 Under Vladimir, the forest lake Sakantsy, whose depth was more than 20 meters, went underground.

On October 12, near the village of Pivovarovo in the Vladimir region, the forest lake Sakantsy more than 20 meters deep went under the ground. All the fish and seaweed fell into the karst fault, and a large funnel with a muddy bottom remained on the site of the reservoir.

A karst funnel is a natural failure of the ground, which occurs when groundwater erodes the soil and rocks, and the earth falls into the emptiness. The diameter and depth of karst funnels can reach several hundred meters. At the bottom or sides of the funnels, entrances to caves can often be opened, and when a few karstic funnels merge, a karst basin is formed.

The Karakal lake of Sakantsy was about 40 meters from the Pivovar Fault, which arose in 1959. The Pivovarovsky Failure itself is a large pit in the middle of the forest, to which, according to local residents, a nine-story house could fit. Some time in the formed pit there was water, which then went underground. Now the lake Sakantsy has gone underground.

“Such failures can be formed anywhere in the whole territory, especially in Vyaznikovsky, Gorokhovetsky and Murom districts. There is an active formation of karsts, “comments Alexei Migachev, director of the Department of Nature Management and Environmental Protection of the Vladimir Region Administration.